Cloud infrastructure-as-a-service (IaaS) is a hot market. Amazon Web Services, now five years old, drives a lot of attention and customer volume, but the vendor strategists at enterprise-facing providers such as IBM, HP, AT&T and Verizon have been building and delivering IaaS offerings. As I’ve studied the market, I’ve heard wildly different types of requirements from buyers and quite a range of offerings from service providers. Yet much of the industry dialogue is about one central idea of what IaaS is – think that’s wrong headed. I found that there were really two buyer types: 1) informal buyers outside of the IT operations/data center manager organizations, such as engineers, scientists, marketing executives, and developers, and 2) formal buyers, the IT operations and data center managers responsible for operating applications and maintaining infrastructure. 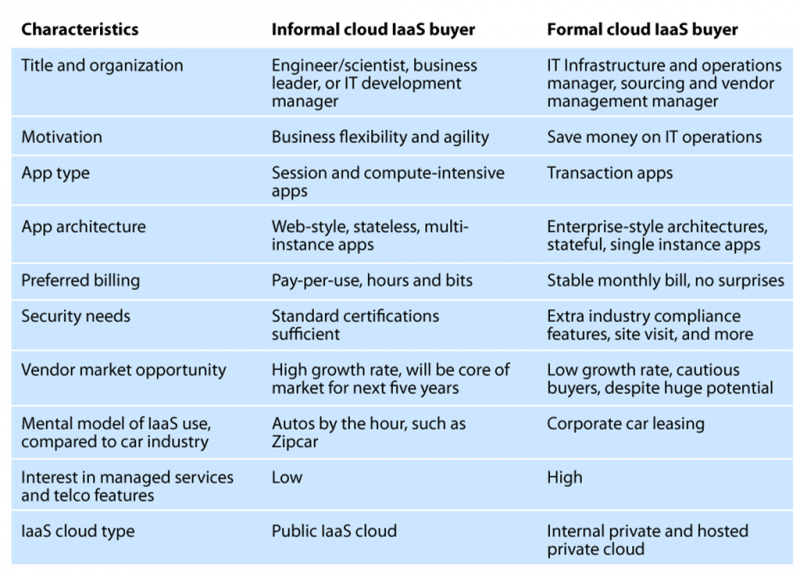 With this idea in mind, I set out to test the views of IT infrastructure buyers in the Forrsights Hardware Survey, Q3 2010 and learned that:

The take away for vendor strategists is that there are two very different types of cloud IaaS buyers. They require different offerings, pricing plans, and technologies. To succeed, providers will need separate technology platforms and business strategies. Most vendors will have to focus on one or the other buyer type, not both, especially the telcos and hosters. Software platform owners such as Google and Microsoft may be able to straddle both buyers, but only with careful focus on limiting the complexity.

The informal IaaS buyer market is driven by Amazon, plus Rackspace, maybe GoGrid and few others and will compete with the emerging PaaS platforms from Microsoft, and Google, and maybe Salesforce.com if it broadens its focus. This is a challenging market to break into and requires a real developer focus and real discipline on limiting complexity. But it offers very high growth rates, albeit off a small base, and lots of dynamism, innovation, and opportunity for differentiation.

The formal IaaS buyer market is much more diffuse and challenging. The early offerings from Terremark (now part of Verizon Business) and Savvis seem to be the right mix of enterprise technologies and standardization without giving in too much to enterprise IT desires for customization. This market will be very difficult to serve – lots of competitors, cautious buyers, and very difficult to establish strong differentiation and strong margins. Rather than the software industry feel of serving informal buyers, it will feel a lot more like the grinding competition of outsourcing and the server hardware business. Despite the large addressable market, I believe this market will grow slowly and be quite challenging for the next several years.