Apple’s announcement of iCloud today coincides with the publishing of a major Forrester report for vendor strategists, “The Personal Cloud: Transforming Personal Computing, Mobile, And Web Markets” that describes the technology, markets, US market sizing, and the key players for this new form of personal computing that spans the job and personal lives. For a take on what Apple’s WWDC announcements mean for Consumer Product Strategists, please see the blog post, Apple’s iCloud Further Cements Platform Loyalty With Superior Total Product Experience, from my colleague Charlie Golvin.

The personal computing experience has become a major pain in the neck, as people add smartphones and tablets to the growing number of PCs they use at work and at home – more than half the US online population, about 135 million people, have the challenge of managing their content across multiple PCs and smartphones. 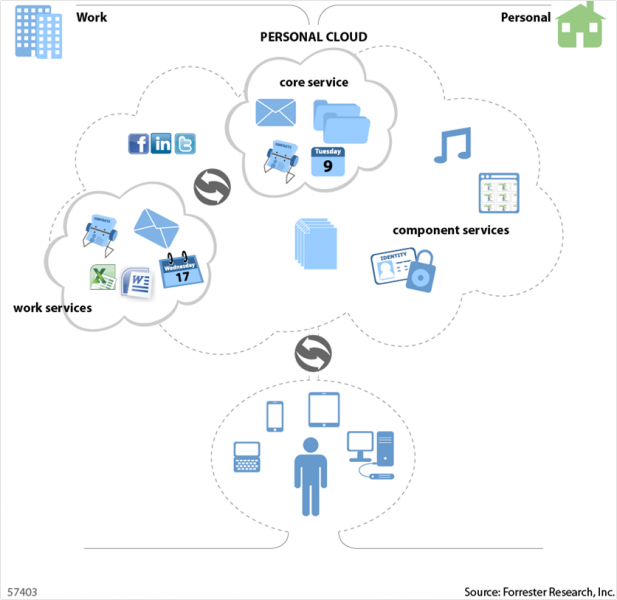 The notable elements of Apple’s WWDC announcements on iCloud are:

With the trifecta of iCloud, Mac OS X Lion, and iOS5, Apple takes the lead in personal cloud implementation and vision, with the broadest support across a user’s Macs, Windows PCs, iPhones, and iPads and deep support for third-party developer integration into iCloud. Google is worth watching as a number two player, but will struggle to match Apple as it tries to move the world’s apps into the Chrome browser. Microsoft, with no articulated vision for personal cloud and Windows 8 expected sometime in 2012, lags significantly. So Apple has lots of time to keep building momentum for its ecosystem of devices and cloud services.