T-Systems’ Analyst Summit 2011 in Frankfurt was dominated by updates on the progress the company made regarding its restructuring projects. As a result of these efforts, T-Systems has created the basis to become a more efficient and agile ICT services provider going forward. Still, in our view, the period between mid-2010 to mid-2011 was a lost year for T-Systems — despite the obvious progress T-Systems made in addressing its past challenges.

In some respects, T-Systems had become a victim of its own success in 2009 and 2010. T-Systems was clearly overwhelmed by its multibillion deals (with clients including Linde, BP, Shell, E.ON, MAN, Continental, etc). Delivery capacities were stretched to the limit, manifesting in serious transition and transformation challenges. T-Systems was forced to allocate more capacities to big deals, thus depressing margins to just over 2% in Q3 2011 (see chart below). T-Systems still aims to reach the peer-group average EBIT margin. 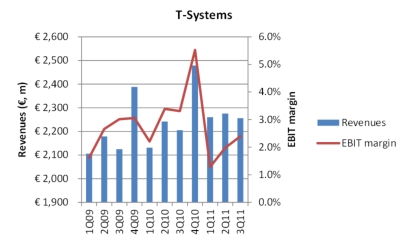 About a year ago, T-Systems began to restructure its entire operations in a mammoth project, effectively redrawing the entire organisational structure and reshuffling the top management team, except for the CEO and CFO. The Analyst Summit provided some insights that these efforts are beginning to bear fruit:

T-Systems’ strategy has not changed much since 2009, essentially focusing on fixing the operational efficiencies and transforming the business whilst selectively pursuing innovation topics. However, T-Systems has lost some sales and innovation momentum during 2010/2011, whilst sending out a message of an overly inward-focused business. Despite recent customer and staff surveys indicating an uptick in satisfaction levels, we believe it is too early to give an “all-clear.”

Longer term, we believe, T-Systems should move even closer to its parent company and take on the lead innovator role for the entire Deutsche Telekom Group, including B2B2C offerings such as home area networking. The announcement that Deutsche Telekom’s technology chief is stepping down only increases this opportunity for T-Systems.