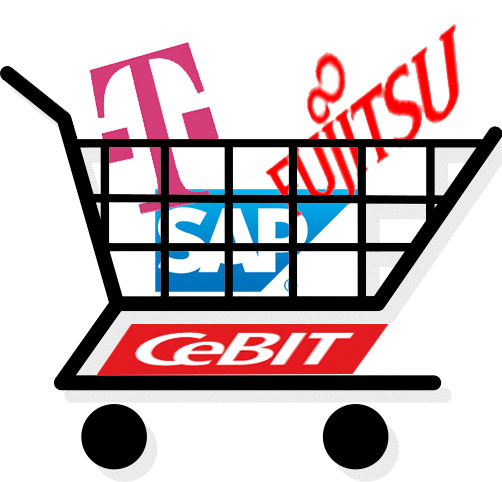 CeBIT 2012 kicks off tomorrow — and believe it or not, it’s still the world’s biggest IT show, attracting 339,000 visitors last year and very likely even more this year.

Cloud computing is all over the fair this year (again), but some vendors have managed to move beyond cloud infrastructure and are starting to combine the ease of use, standardization, and opex-based consumption with business software. I had the chance to talk to some vendors last week about their upcoming announcements. Forrester analyst Holger Kisker has already pointed it out in his 10 Cloud Predictions For 2012:

The Wild West of cloud procurement is over! More enterprises and SMBs than ever are discovering a formal strategy to purchase cloud services in 2012. The easiest consolidated way to do this is an app store or cloud marketplace.

Forrester has already published several reports about the potential of mobile app stores in the enterprise or the self-service benefits of app stores in the ERP space. What’s more, app stores have become the major go-to-market strategy for most emerging SaaS vendors and play a central role in emerging cloud business models such as the unified cloud broker concept. So, let’s see what’s coming up this week at CeBIT:

Deutsche Telekom is actually the biggest surprise for business software this year in Germany. No, the former telco monopolist will not become a software vendor itself; there would be no real credibility for such a claim. However, Deutsche Telekom will complement its huge market share in Germany in small and medium-size businesses with a new SMB marketplace ecosystem. SMBs will be able to subscribe to SaaS applications out of a larger number of Deutsche Telekom’s new business software partners in a fully functional app store. Trusted infrastructure, reliable network bandwidth, and consolidated billing are just some of the obvious value-adds from a customer perspective. Nevertheless, ultimate success will really depend on the number and diversity of ISVs buying into this platform and marketplace approach. Unlike other telco marketplaces, the Deutsche Telekom SMB marketplace ecosystem is based on the emerging open source cloud provider stack OpenStack.org. ISVs can therefore much more easily port solutions built for the Deutsche Telekom marketplace to other telcos’ infrastructure, as long as that infrastructure is also built on OpenStack — as is the case with AT&T.

Moving up to medium-size and large enterprises, there is a suprising amount of momentum emanating from Fujitsu. While most cloud platforms are mainly attractive for new development, Fujitsu addresses the transformation of existing software solutions into SaaS applications. In additional to a multitenant infrastructure, a basic billing system, and subscriber management services, Fujitsu is launching its Business Solution Store this week. The technology stack is especially suitable for Java applications created in the post-cloud decade and will allow these “legacy” ISVs to embrace the SaaS business model with much less effort. Fujitsu also offers strategic consulting and transformation services provided by its partner Strategius. Medium-size ISVs in particular will value a fully functional marketplace that deploys their solutions in minutes into the mission-critical enterprise infrastructure of new customers.

SAP has been working on its marketplace around SAP BusinessByDesign for a while. However, the merged experience of mobile business applications for all SAP product lines and add-ons to SAP’s BusinessByDesign SaaS ERP now numbers 181 solutions. Some of these are just small additional reports for ByDesign, but others are pretty impressive industry solutions demonstrating a major bet of the first ISVs into this platform and its marketplace. Unlike the older SAP EcoHub, the new SAP Store is fully functional and can deploy solutions — similar to the competing AppExchange from salesforce.com — to an existing customer tenant within minutes. But SAP has gone further and added more enterprise-grade features, such as volume purchases and compatibility tests, that make sure that customers do not subscribe to conflicting add-ons. The SAP marketplace will also support corporate perspectives, allowing a group CIO to select a subset of solutions visible to all associated subsidiaries. SAP also runs some Q&A on each partner solution. Unfortunately, SAP has still not fully addressed a marketplace approach for the smaller companies around its BusinessOne product — and now it suddenly has competition from Deutsche Telekom!

Salesforce.com, with its App Exchange, is the incumbent of business app stores. 316 applications already run natively on the force.com platform-as-a-service (PaaS) and a large proportion of the 1,423 total apps in this business marketplace is closely integrated with force.com. Salesforce’s partner enablement team helps ISVs with consulting not only around technology, but also in the direction of the business model, pricing, and even the structure of a SaaS sales force. There is nothing really new about Saleforce’s marketplace at this year’s CeBIT, except that the number of solutions from Europe-based providers is slowly but steadily growing. In addition to the app exchange targeting businesspeople, the foundational PaaS Heroku, which Salesforce acquired, offers a marketplace of prebuilt components to developers with its add-on collection.

Apple’s iTunes is the original blueprint for most app stores and has managed to merge the consumer experience for purchases of music, video, games, mobile apps, and — since Apple’s OSX 10.7 Lion — also to desktop and laptop apps. Despite Apple’s leadership in consumer app stores, Apple is a disappointing laggard in terms of business app stores. The platform is not a channel for ISVs offering a SaaS business application. Imagine if you would be able to log into your favorite SaaS applications with your Apple ID and could charge it via iTunes! But, unfortunately, Apple does not have such an ecosystem.

Microsoft is pretty excited about private clouds, the public cloud infrastructure Azure, and the SaaS delivery of parts of its Office 365 suite. However, the purchasing experience is scattered. The Pinpoint Marketplace, which focuses on business applications, is still just a marketing catalog without any functionality, and it’s totally separate from the shop for mobile apps and from Microsoft’s Gaming Marketplace. This is not in sync with overall cloud engagement!

ATOS, HP, IBM, Oracle, Software AG, Tibco, and VMware have great potential in cloud services. Unfortunately, none of them has combined their outstanding platform offering with self-service app stores to turn their ecosystem into immediate customer value. CIOs should watch the emerging space of business app stores and challenge their preferred suppliers if they are in the group of laggards.

PS: If I missed a major app store, please don’t hesitate to leave a comment below.