Skip to content
< Blogs
Home > Featured Blogs > The Data Digest: Tablet Ownership In The US And Europe

Earlier this year, Forrester’s published its tablet forecast for the US. With 55 million iPads sold through December 2011, and an estimated 5.5 million Amazon Kindle Fires sold in their first quarter on the market, tablets have gained unstoppable momentum. Forrester forecasted that tablets would reach 112.5 million US consumers — one-third of the US adult population — by 2016. Since then, a slew of new tablets have been unveiled, including the recently announced Windows Surface and Google Nexus 7.

For now, the US is definitely the leading market for tablet adoption. Forrester’s European and North American Technographics® Surveys show that both uptake as well as interest are highest in the US. 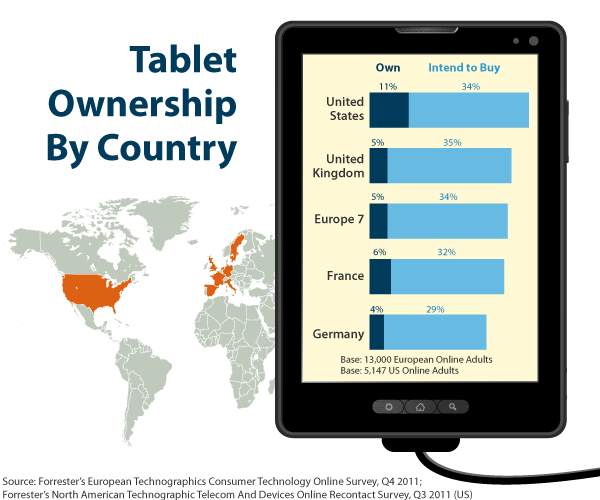 While we forecast uptake to grow rapidly, we don’t expect tablets to be computing’s final form factor; new form factors will pose opportunities for both disruption and innovation. My colleague Sarah Rotman Epps has identified five form factors as the best candidates for what comes next: wearables, embedded devices, surfaces, flexible displays, and mini-projectors. Products that can work easily with other products will be the most successful. The Google Glass project is a great example of how the future might look like.