Facebook may play host to nearly a billion users, but Twitter controls the social ecosystem today. Twitter just announced its "Certified Products Program" and introduced a literal seal of approval for select third-party Twitter developers. Twitter explains that with the plethora of social technologies out there, it aims to simplify the ecosystem and "make it easier for businesses to find the right tools." 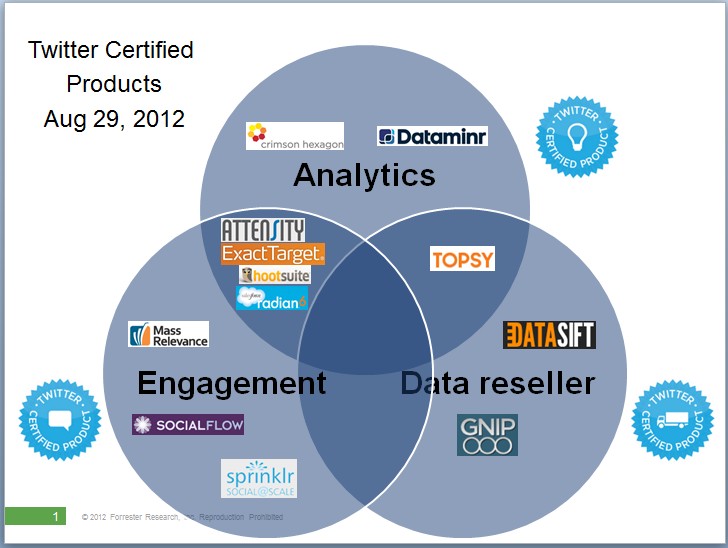 Why is this worth blogging about? (It's not just a challenge to see how many times I can write "Twitter" in one post.) It's because Twitter is finally putting a stake in the ground and letting third-party developers know who's in charge. Over the past few years, Twitter has grown into the successful social network it is in great part because of its third-party developers. The apps we use – both for personal use on our varied devices as well as the data-driven technologies we use for business – helped make Twitter popular. But now that it's become one of the social kings, it's starting to lay down the law.

Just a few weeks ago, Twitter stirred the pot with its API changes – specifying how apps access, manage, and deliver tweets. Now, with its certification program, it's clear that Twitter wants even more control. Although Twitter doesn't fully explain what it took to be one of the first 12 partners, the developer's blog post invites others to participate – requesting only that products meet "Program Requirements." That may sound easy enough, but these requirements are actually very strict and cover everything from how to display a tweet within the tool to naming conventions ("e.g. '140 Tweets' not '140 social media mentions'"). So if you're a developer and want a shiny Twitter badge, you'd better follow the rules – and get in line. Not everyone responded positively to Twitter's API changes, but now it looks like there's little room for negotiation. The Twitter Certified Partner Program forces third parties to play by its rules.

But that's not necessarily a bad thing. In fact, the certification program may actually help the social technology landscape. By forcing vendors to abide by Twitter's laws, it will standardize the usage of Twitter data and drive innovation around possible analyses. Instead of vendors competing about their "exclusive" Twitter tools, they can spend time building more functional analytics systems around the Tweets. Social media is in dire need of standards – perhaps standardizing data usage will lead to progress on this front (at least for Twitter).

Lastly, while I commend the 12 original partners listed above, I hope this educates the market on types of use of Twitter data, not just shortens potential vendor lists. As I've posted here before, there are hundreds of tools to help companies manage and analyze social data. So even though Twitter's promise to "make it easier for businesses to find the right tools" makes sense and defining the three tool subsets will help businesses understand the difference between the various Twitter technologies – that's only the start. A core theme of The Social Intelligence Playbook is that finding the right technology starts with defining your business goals first. (And as a reminder, "engagement" is just as much a business goal as "analytics.") As a result, Twitter's certification program won't actually help buyers navigate the social technology ecosystem, but it sure will help them control it.