The service desk, and with it IT support and customer service, has long been a big part of how end users (or, as I like to call them, “internal and external customers”) perceive the IT organization and the quality of its service delivery. Think about it, customers are forming their opinions based not only on their hardware and the IT services they consume but also on: the “IT people” they come into contact with, how these people perform, and how they (the customer) are treated. Also think about the context – it’s usually when the IT isn’t working and the customer is unable to do their job.

The bottom line for me is that none of us corporate minions have time for IT failure and, while it is still unavoidable, IT support staff need to see the business impact – and realize that there is no such thing as IT failure . . . that there is only business- and people-impacting failure. Take at look at the following Forrester Forrsights data, which compares the business and IT views of IT performance, and if you are an IT professional try not to weep at how poorly IT is perceived: 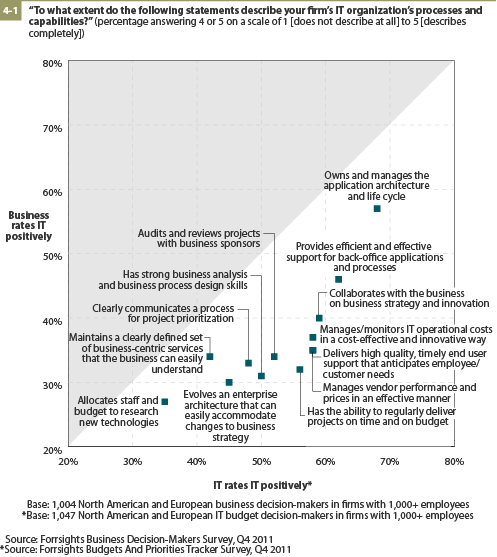 The harsh truth: IT can no longer afford to ignore its “customers”

In previous blogs (particularly Paging The IT Organization: You Need To Support The People Not The Technology and 12 Pieces Of Advice For IT Service Desks – From A Customer!) I’ve outlined many of the common issues with IT support groups and their distinct lack of customer centricity let alone customer service (some of which I admit has been caused by the constant pressure to cut costs).

But something’s got to give, and the work of my Customer Experience colleagues (documented in Forrester’s new book, Outside In, and the blogs of its authors, a recent one being Why Some Companies Succeed – For Now – Despite Their Poor Customer Experience) shows what a difference customer experience makes to company success. Rackspace is such a company – it has differentiated itself through service.

Fanatical support – “was ist das?” I hear some cry

At the end of August I visited Rackspace to learn about what it calls “fanatical support.” As I wrote in Staffing For IT Service Delivery Success: Think Employee, Think Customer, Then Repeat, “Rackspace exemplifies the benefits of employing the right kind of people (“obsessive” about what they do) and how such a competitive differentiator has translated into business success.” Rackspace relies on capable people, not limited and rigid processes operated by “scriptbots,” to support its customers.

To quote Rackspace: “We don’t use scripts to solve problems; we use our brains. Our customers deserve more than a canned script.” It’s part of a strategy that focuses on service not technology. It might sound cliché but it’s about “doing whatever it takes to make our customers happy, seeking to exceed their expectations by providing outstanding service at a world-class enterprise level . . . As and when challenges arise, we will break through walls to make sure customers are taken care of, and problems are resolved.”

“Didn’t you mention something about the real cost of poor service?”

Ah, the real reason for the blog, but I wanted to set the scene . . . Rackspace has recently announced the findings of the Rackspace IT Industry Service Report, its first annual snapshot of IT service quality in the UK (based on the responses of 250 enterprise decision-makers). And, to be honest, the results are very scary:

With the real scary headline being that:

Mark Twain (or maybe Disraeli, to whom he attributed it) used “Lies, damned lies, and statistics” as a phrase to describe the cynical use of statistics to unduly influence people, and in many ways these statistics are so scary that one wants to not believe them. But consider this: even if these statistics aren’t the “reality,” they are the perception of reality, and people will more often than not make decisions based on their perceptions of reality – in fact many would argue that your perception IS your reality.

So how many IT organizations will lose customers through not only poor IT service delivery but also poor customer service or experience? For internal IT organizations, how many will be severely neutered or cease to exist entirely as a result? Somehow Darwin’s “survival of the fittest springs” to mind. IMO, it really is a case of “adapt or die,” so . . . I dare you to speak to some random customers to find out what they really think about you. I’m pretty confident that they probably aren’t as happy as you think they are.

If you want to read more of the detail, please see the Rackspace IT Industry Service Report.

As always, your comments are encouraged and appreciated.