Skip to content
< Blogs
Home > Featured Blogs > Are You Like Oracle When It Comes to the Cloud?

Oracle makes itself an easy target for the ire of the cloud community when it makes dumb, cloudwashed announcements like last week's supposed IaaS offering. But then again, Oracle is just doing what it thinks it takes to be in the cloud discussion and is frankly reflecting what a lot of its I&O customers are defining as cloud efforts.

Forrester Forrsights surveys continue to show that enterprise IT infrastructure and operations (I&O) professionals are more apt to call their static virtualized server environments clouds than to recognize that true cloud computing environments are dynamic, cost optimized and automated environments. These same enterprise buyers are also more likely to say that the use of public cloud services lie in the future rather than already taking place today. Which fallacy is more dangerous?

The latter is definitely more harmful because while the first one is simply cloudwashing of your own efforts, the other is turning a blind eye to activities that are growing steadily, and increasingly without your involvement or control. Both clearly place I&O outside the innovation wave at their companies and reinforce the belief that IT manages the past and is not the engine for the future. But having your head in the sand about your company's use of public cloud services such as SaaS and cloud platforms could put you more at risk.

We've said for a while now that business leaders and developers are the ones driving the adoption of cloud computing in the enterprise, and this is borne out in our surveys. But Forrsights surveys also show that these constituents are also far less knowledgeable about the companies' legal and security requirements than I&O professionals, which means the extent to which they are exposing your company to unknown risks is…frankly, unknown. 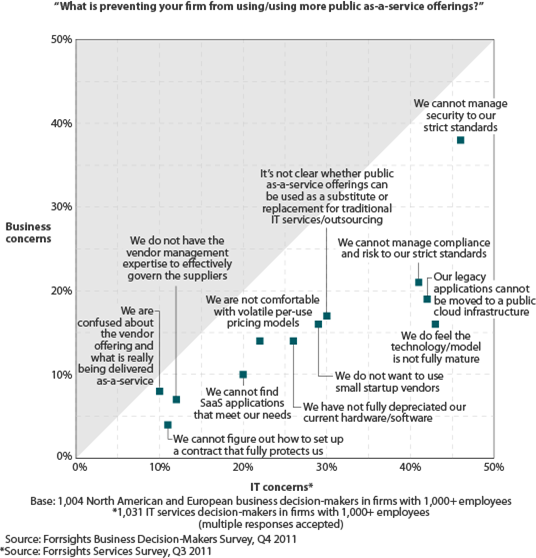 So now that the cloud genie is out of its bottle in your company (don't deny it), what should you do about it? Well, you can't force it back in — too late. You can't keep pretending it isn't happening. And sorry, "not approved" or "too risky" will simply paint I&O leaders as conservative and behind the times. Instead, it's time to acknowledge what is going on and get ahead of it. Finding the right approach for your company is key.

On February 12 and 13, I'll be traveling to BMC events in Washington, D.C. and New York City specifically to help you tackle this issue. Whether you are in highly regulated industries such as financial services or pharmaceuticals or work for organizations facing stiffening rules and regulations such as the US Federal Government that is staring down FedRamp, you must be proactive about cloud engagement with the business. As our Forrester Cloud Developer Survey showed, the use of sensitive data in the cloud will happen in 2013. The question is whether you will know about it, be ready for it, and be engaged.

I encourage you to join me in these discussions so you can be best prepared and move from laggard to leader in cloud adoption within your company. After all, you can cloudwash all you want, but you won't lead until you get real about the cloud.