This week, Google announced that it will shut down Google Reader on July 1, 2013. In its announcement, Google states that it’s doing this because the usage of Google Reader has declined and it wants to concentrate on fewer products. There was a lot of buzz online about this decision, and some fanatical Google Reader fans put together a petition to keep the RSS reader alive. They garnered more than 50,000 signatures in just a few hours.

This whole debate sparked my interest, and I analyzed Forrester’s Technographics® data to get a better understanding of the usage of RSS feeds over time. I found that Google is right about the decline. Our data shows that it was always only a dedicated group who used RSS feeds at least weekly — about 7% of US online adults in 2008; this had declined to just over 4% last year, with about one in 10 US online adults using RSS feeds about monthly. 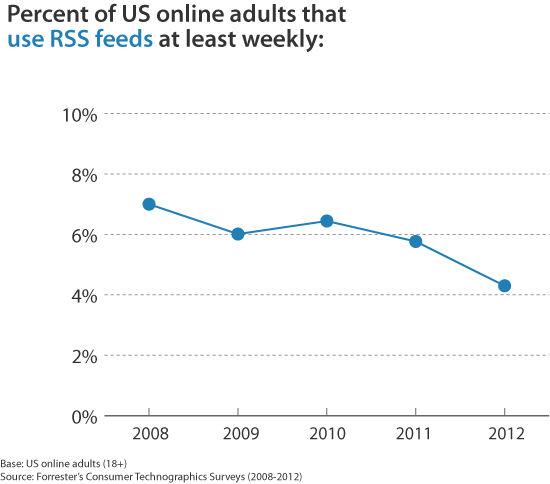 This shows, of course, penetration, not reliance. Those 4% of US online adults might be very avid users, whose existence (personally or professionally) relies on these feeds. But Google has a business to run, and that means prioritizing investment decisions. And looking at the trend data, it’s obvious that RSS feeds don’t have a future.

Tina Moffett 7 days ago
Marketing analytics is the practice of measuring, managing, and analyzing data from marketing initiatives — including channels, programs, campaigns, and tactics — to improve marketing effectiveness and identify opportunities to optimize short- and long-term objectives. You probably already have basic marketing measurement approaches running — whether it’s last-touch or a 30/60/90-day analysis of your email […]
Read More
Blog