Recently, I received a visit at home from a religious organization, which handed me two of its publications. As I believe that every religion has some wisdom to share, I read both magazines. What really struck me was the cross-media approach of the magazines; many articles referred to a video or website, and QR codes were placed throughout. Reading this magazine, I thought back to my recent trip to the US, where I also saw many QR codes: on advertising in the subway, in stores, in magazines. However, I didn't see anyone reading those codes. Thinking about this a bit longer, I couldn’t think of any occasion when I had observed someone using a QR code.

With that in mind, I had a look at Forrester’s Consumer Technographics® 2012 surveys for both Europe and the US to understand the uptake of QR codes by the general online audience. I found that about 8% of US online adults with a mobile phone have used QR/2D bar codes in the past month — up from only 1% in 2010 and 5% in 2011. Uptake doesn't really show huge differences by age, interestingly enough, but in both the US and Europe, men are more likely to use them than women. 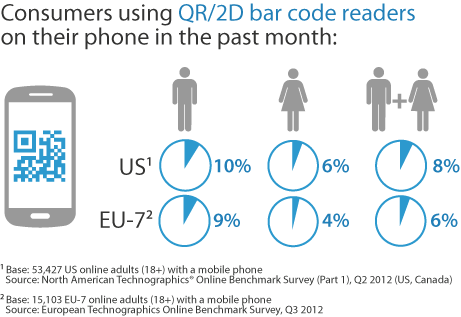 In his recent report “How Extended Packaging Will Redefine Relationships Among Brands, Retailers, And Customers”, my colleague Thomas Husson gives his perspective on mobile bar codes. He writes: “In just one year, we have seen a surge in consumer adoption. For example, in Q4 2012 Scanlife, one of the leading bar code platform providers, reported nearly 18 million scans (an increase of 64% year-over-year), with 5 million unique users.”

Despite their still limited uptake today, QR/2D bar codes have a great future ahead of them. As Thomas mentions: “The mainstreaming of smartphones with integrated 2D bar code scanning as a core camera functionality, the end of the bar code war, improvements in communicating consumer benefits, and the mobilization of relevant content will help scale bar code opportunities in the next two to three years.”