Three years ago, Stanford Communications Professor Emeritus Donald F. Roberts believed that American youth had hit a ceiling on media use, as there simply weren’t enough hours in the day to increase the amount of time children were spending on media. He was astounded to see that time spent on media consumption did in fact grow, as young individuals began consuming heavily across multiple devices at the same time. And the numbers have continued to increase since: More than 80% of US online consumers ages 12 to 17 multitask online while watching TV.

Multitasking behavior among this demographic has changed not only in terms of the total number of hours but also in terms of the devices used. Forrester’s Consumer Technographics® data shows that in 2011, young consumers primarily went online via desktop or laptop computers while watching TV, while now they prefer to use more portable devices for multitasking activity: 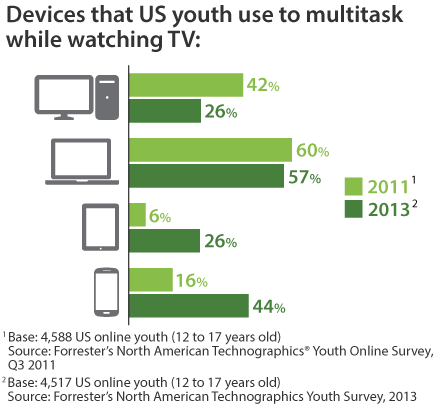 Consumers are reaching for technology at younger ages — even young infants are being welcomed into the virtual world — and with greater ease. While the pros and cons of constant hyperconnectivity among American youth are up for debate, marketers who are messaging to this younger demographic should be aware of the opportunities and challenges that this group’s media engagement poses. In a previous report, I noted that today’s youth have grown up in an age of technology and can't imagine life without it; now, my colleague Tracy Stokes takes that idea to the next level, as “digital media isn’t just another channel, it’s intrinsic to [a young consumer’s] life.” Because our youth live and breathe among multiple screens, brands need to optimize their channel strategy to ensure relevant, convenient experiences that capture the capricious attention of this upcoming generation.

Tina Moffett 2 days ago
Marketing analytics is the practice of measuring, managing, and analyzing data from marketing initiatives — including channels, programs, campaigns, and tactics — to improve marketing effectiveness and identify opportunities to optimize short- and long-term objectives. You probably already have basic marketing measurement approaches running — whether it’s last-touch or a 30/60/90-day analysis of your email […]
Read More
Blog