Voice-controlled intelligent assistants offer a tantalizingly productive vision of end user computing. Using voice commands, users can extend the computing experience to not just mobile scenarios, but to hyper-mobile, on-the-go situations (such as while driving). With wearables like Google Glass, voice command promises even deeper integration into hyper-mobile experiences, as this video demonstrates. And voice controlled intelligent assistants can also enable next-generation collaboration tools like MindMeld.

In spite of this promise, there remains a lurking sense that voice control is more of a gimmick than a productivity enhancer. (As of the time I posted this blog, a Google search for Siri+gimmick yielded… “about 2,430,000 results”). To see where voice control really stands, we surveyed information workers in North American and Europe about their use of voice commands. 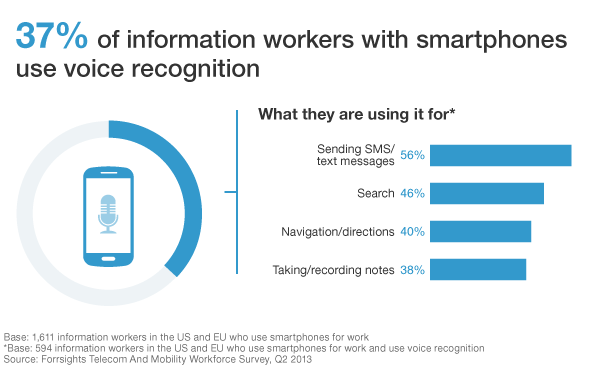 In reality, many information workers with smartphones are already using voice commands – at least occasionally. Our survey revealed that:

Overall, our survey shows that a sizable percentage of workers are starting to embrace voice command. Yet it will be some time before voice controls join keyboards and mice as computing mainstays. Why? Although technical hurdles continue to fall, the market remains stifled by:

The bottom line: Expect voice control and intelligent assistants to continue to grow in popularity among workers and consumers. But expect speed bumps along the way as a variety of vendors compete to craft our voice controlled computing future.