One noteworthy detail emerged from Microsoft’s quarterly earnings call yesterday: A $900 million write-down for “inventory adjustments” related to the underperformance of Windows RT. This result didn’t come as a surprise because:

So it seems that the Windows RT value proposition has come down to one asset: Microsoft Office. Microsoft has invested in an upgrade to Outlook for Windows RT, offering a much more complete user experience than at launch.

But the biggest asset Windows RT has is actually based on an app that Microsoft hasn’t released – Office for Apple’s iPad. While Office came to the iPhone (for Office 365 subscribers) in June, a comprehensive, touch first, iPad-specific Office offering is missing (aside from OneNote). It’s easy to infer that the absence of Office for iPad has more to do with propping up Microsoft’s hopes for Windows RT than with any lack of development resources at Microsoft. Indeed, the recent reorg at Microsoft revealed a new priority from CEO Steve Ballmer:  “One Microsoft, all the time.” Presumably this means cross-promotion of offerings like Windows RT and Office.

Yet there is a hidden danger of holding out on Office for iPad and Android tablets – competitors tend to fill the gap and users establish different habits. Over 3 years into its market life, Apple’s iPad has sold over 140 million devices, and sales continue to grow year over year. Android tablets have finally taken off, with 25% of information workers in the US and EU who report using a tablet for work saying it’s an Android device.

Microsoft’s problem: Workers and consumers are already exceptionally productive with their tablets. We asked information workers with tablets – 86% of whom own an iPad, an Android tablet, or a forked Android tablet – whether they agree with the statement “having a tablet makes me more productive.” The result? Some 70% agreed with a rating of 4 or 5 on a 5-point scale. Again, this is a largely iPad- and Android tablet crowd… and they’re already finding tablets productive without Microsoft Office. 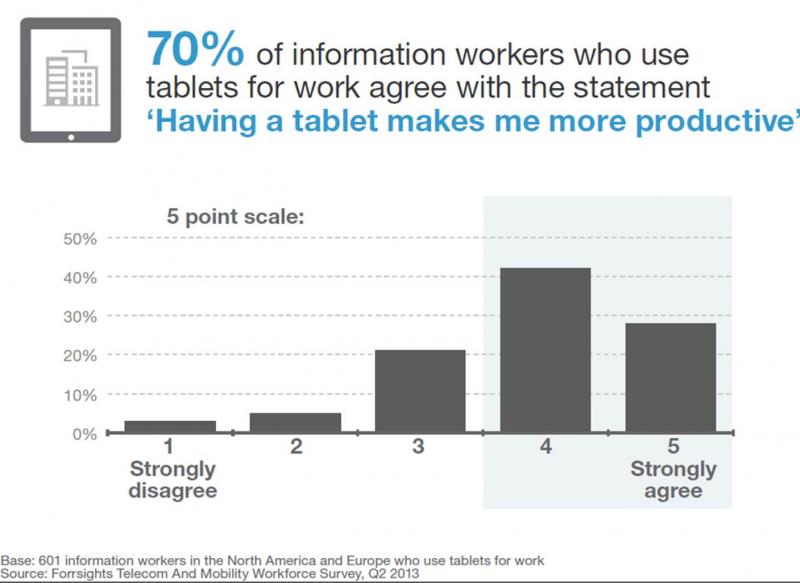 The bottom line is that “protecting” Windows RT by keeping Office off of Apple’s iPad and Android tablets isn’t working. It’s instead creating risk for Office as users find other ways of getting things done. If 10% of the 140 million iPad owners bought Office for $99.99, Microsoft would earn $1.4 billion in topline revenue – or $500 million more than the Windows RT write-down last quarter.

The Art and Science of Storytelling: An Interview with Bryan Yee