Just as London buses seem to come down the road in a series, I’ve been very busy with several of Forrester’s German clients in the past weeks: running three separate “21st-Century Marketing System” client workshops (well, to be accurate, one was in Austria, but we spoke German). I also met with Germany’s two largest indigenous IT companies (though the meeting with SAP was in Istanbul). So this flurry of Germanic activity got me thinking about penning a new “Letter From Germany” blog.

Last month, I visit Jena, in Thüringen, the headquarters of Intershop. As I had worked very closely with this company back in my HP days in 1998 (Heh! I remember when they were NetConsult), even helping Intershop set up shop in the US as an ISV partner, it was a trip down memory lane. At the time, Intershop, led by its young CEO Stefan Schambach, was the darling of the German business press; the closest that Germany had to the AOL, Amazon, Google, or Yahoo founders. The eBusiness bubble-burst set Intershop back somewhat, but it is still around with a strong, loyal set of eBusiness customers around the world. My colleagues Peter Sheldon and Andy Hoar published their Forrester Wave on B2B Commerce Suites last week and we were all pleased to see Intershop earn a position as a leader in their analysis. And another German vendor, hybris (an SAP company),was also up there with them. Congratulations to them both.

Within the wave report, the colleagues also pointed out that customers who migrate to an online purchase environment actually end up spending more money per transaction and more money overall post-migration (see below). And they are less expensive to support once they migrate online. 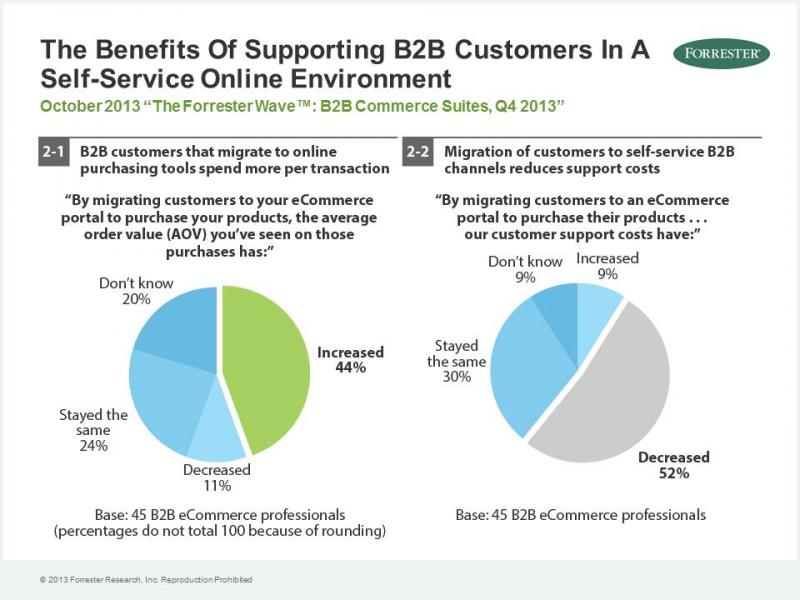 So Forrester anticipates many B2B companies starting the process of "flipping" their sales models and creating fundamentally different businesses that require fundamentally different technologies, as well as different marketing.  I know that I posted “B2C Or B2B? It’s So The Wrong Question” last week — and thanks for all the responses. But Andy and Peter have some other interesting observations about the differing requirements of B2B commerce, compared to B2C, which are also relevant for our marketing discussions.

My view is that really forward-thinking companies will consider distribution as part of the marketing strategy, and that means debating which channels to deploy for which products and in which markets.  This omnichannel mix, as we like to call it, includes the options of direct sales, indirect sales with varying degrees of distribution, plus the online channel. In fact, Andy Hoar, Tim Harmon, and I will be working on some research around how to determine and define an omnichannel strategy. One thing is clear: Vendors won’t be allowed to decide the strategy inside out. Their customers will make their decisions and the success of the strategy will depend on how well they understand and track buyers’/customers’ channel preferences.

Of course, if your marketing organization still reports to the Chief Sales Officer who is only measured on direct selling, with perhaps a partner channel for those markets you cannot put feet on the street, this omnichannel discussion will be irrelevant. It will be your competitors who take advantage of buyers’/customers’ channel preferences.

Agree? Food for thought? As always, I’d love to hear from you on this and other topics.

Unlock The Full Potential Of Your B2B Marketing Organization

Discover why an ecosystem approach to running a marketing organization is essential to success.

Rani Salehi 6 days ago
Using a digital pyramid of purpose helps communicate the capabilities and competencies that are needed to effectively deliver digital customer experiences and advance the business strategy.
Read More