Skip to content
< Blogs
Home > Featured Blogs > Office Productivity Software Is No Closer To Becoming A Commodity
We just published a report on the state of adoption of Office 2013 And Productivity Suite Alternatives based on a survey of 155 Forrester clients with responsibility for those investments. The sample does not fully represent the market, but lets us draw comparisons to the results of our previous survey in 2011. Some key takeaways from the data: 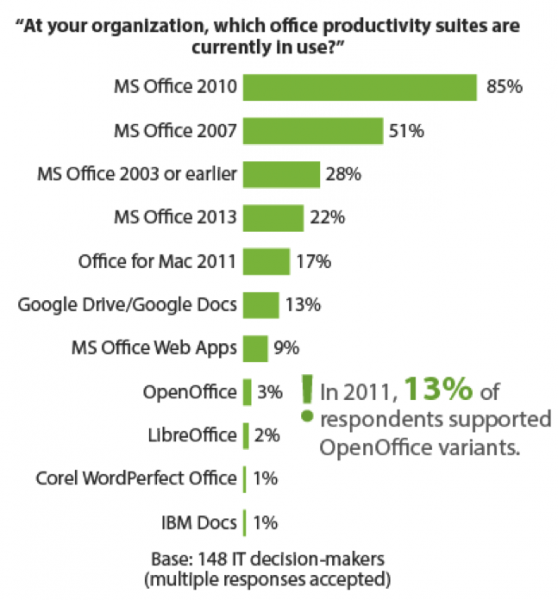 Microsoft continues to have a stranglehold on office productivity in the enterprise: Just 6% of companies in our survey give all or some employees an alternative instead of the installed version of Microsoft Office. Most surprising of all, multi-platform support is NOT a priority. Apps on iOS and Android devices were important to 16% of respondents, and support for non-Windows PCs was important to only 11%. For now, most technology decision-makers seem satisfied with leaving employees to self-provision office productivity apps on their smartphones and tablets if they really want them.
Do you think we're getting closer to replacing Microsoft Office in the workplace?