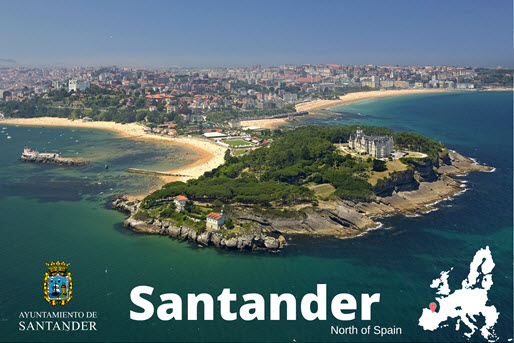 The city of Santander boasts 20,000 fixed and mobile sensors throughout the city – on buses, in parks, waste bins and in buildings.  These sensors capture bus locations, humidity in the air and soil, pollution etc. They tell bus riders when their bus will arrive; they tell city park workers when to water the gardens. They also dim lights when there is no one on the street at night, and turn them on when cars or pedestrians pass. They create a complex internet of things and a rich source of data. Together with the platform enabling the aggregation, analysis and visualization of these data, they (will) provide a valuable tool at the disposal of city leaders, enterprises, developers and citizens. Today Smart Santander is a living lab (with an application pending to be part of the European Network of Living Labs).

Having launched in September 2010 with €6 million budget (primarily from the EU) and 15 partners, the project is now in its 3rd and final phase.  With its sensor network, the city demonstrates the benefits of the Internet of Things across several initiatives:

Although not sensor-based, the city also has several initiatives that promote citizen engagement. The Santander City Brain provides an online platform for citizens to share ideas, or vote and comment on ideas shared by others. The platform incorporates game-like incentives with a point system for various activities and prizes for points and for ideas. The current contest offers 3000€ for submitting an idea.  And, people are using the platform.  A recent discussion about parking on a specific street received 60 comments. To date, the ideas platform has received 715 ideas for strategic planning.  The "brain" is not for complaints. Citizen reporting can be done through their Citizen Mailbox which captures issues across transport, crime and any other areas of concern.

Beyond The Technology: Context Proves the Biggest Challenge

The focus of the Smart City Santander project, however, was not only on the technology – which has proven up to the task.  Contextual factors were also a concern. How would the end users respond?  Is the legal and regulatory environment compatible with the project?  What business model would allow for the project to be sustained after the initial pilot phase, and in particular after the funding from the EU and other participants ended?

These questions continue to inhibit further roll-out of sensor networks and the platforms for monitoring them. Although the pilots have demonstrated that the technology works, the ROI remains unproven and the actual cost – when it’s not the EU paying – remains unclear. On a positive note the cost of sensor deployment has fallen from 260€/sensor to about 120€/sensor through the course of the project.  But which projects really need a technology solution?  Given unemployment rates in Spain, particularly youth unemployment, do cities need sensors to trigger the watering of city gardens or could an actual person do the job cheaper and more efficiently? And, who will pay for the infrastructure and operational costs, particularly given the state of municipal finances?Cities must select the projects that make the most sense for them, and must negotiate an appropriate business model with their utilities and the technology providers.

Telefónica – one of the Santander’s commercial partners and provider of the smart city platform for the pilot – and others are working closely with cities to help develop a model that will prove sustainable. Madrid has already issued a commercial request for proposal, and several other cities including Santander are expected to follow shortly.

The key lesson of these early pilots is that cities and their partners must think beyond the technology, and be realistic about what is needed and can be sustained over the long term.