On Tuesday at 8 a.m., I received a call from my mother. Instead of driving to her office, as she’s faithfully done at that time for more than a decade, my mother was caught between shelves of cashmere. Macy’s was having a pre-holiday one-day sale, and my mother was thrilled to be part of the early-bird crowd getting first dibs on cardigan colors at 50% off. I was struck — not by my mother’s rare excitement about the discount but by Macy’s success in changing her behavior. My mother traded her comfortable weekday rhythm for a detour to the mall, thanks to Macy’s timely, exclusive promotion.

This example is representative of a major potential shift in which consumers break traditional habits thanks to strategic sales and effective marketing. My mother’s impromptu spree is only a precursor to the behavior that could play out next week when Thanksgiving Thursday becomes the new Black Friday. For the first time in its history, Macy’s will open on Thanksgiving itself to compete with retailers like Target and Best Buy, which open their doors moments after the pie crumbs and coffee cups are cleared away. For Wal-Mart, Black Friday 2013 will start one full week early.

Forrester’s analysis of NetBase Social Listening data shows that consumer conversation about Black Friday sales is already gaining momentum. After the release of Black Friday ads in mid-November jump-started this dialogue, the volume of online posts and readership continues to swell in anticipation: 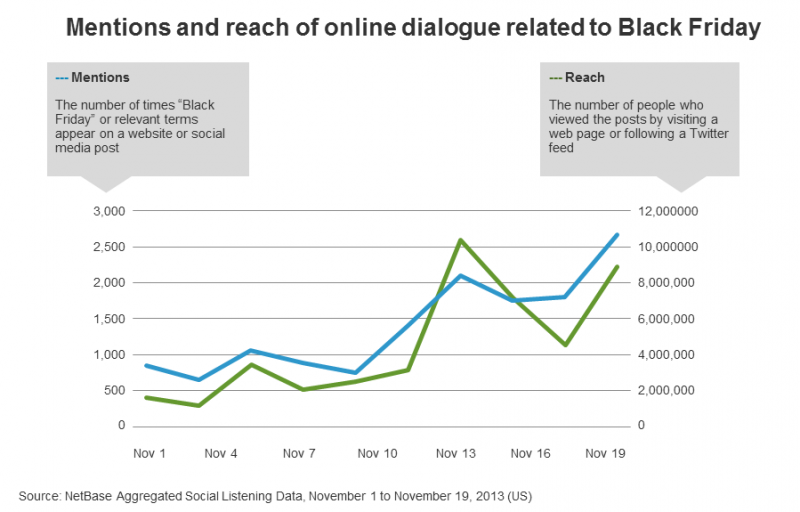 Our research last year showed that Black Friday is a day that families have begun to incorporate into their holiday traditions, particularly lower-income groups. My colleague Sucharita Mulpuru noted that “the promotional offers and activities of retailers [. . .] significantly shape shopper habits during November and December.” With this year’s early access to Black Friday sales and smart messaging, behaviors will continue to change — more consumers are likely to start celebrating age-old Thanksgiving traditions in new ways. As one online guide to Black Friday suggests, the shopping experience is becoming a tradition itself: Rather than promoting togetherness around the dinner table, families can embrace the holiday season during collective trips to the mall — and cash in on deals while they’re at it.

Nicole Murgia 22 hours ago
If you’re like many retailers, you treat gift cards as a product — with product leads and inventory planning priorities. If this is true for your business, you’re in need of a gift card strategy refresh. Why now? Today’s advancements in payments tech and digitization mean that your gift cards can (and should!) be so […]
Read More
Blog