This week, Facebook announced its rollout of auto-play advertising videos – starting with a teaser for the upcoming movie Divergent. The video ads automatically start playing, without sound, when they appear. Users can click on the video to view it with sound or scroll past it if they aren't interested.

Video definitely has the future. In a blog post by my colleague Michael O’Grady last year, he revealed that video was the fastest-growing digital content category. The Forrester Research Online Display Advertising Forecast, 2013 To 2018 (Western Europe) shows that European Internet users spent 68% of their online time in 2012 watching online videos, and we expect more than 90% of the online population to watch online video regularly by 2017. As a result, video advertising will account for a third of total display advertising spend in 2018.

But, screen size matters. Data from Forrester’s European Technographics® Benchmark Surveys 2013 shows that mobile is lagging, with only 12% of European online adults who use a mobile phone watching video on their device at least weekly. 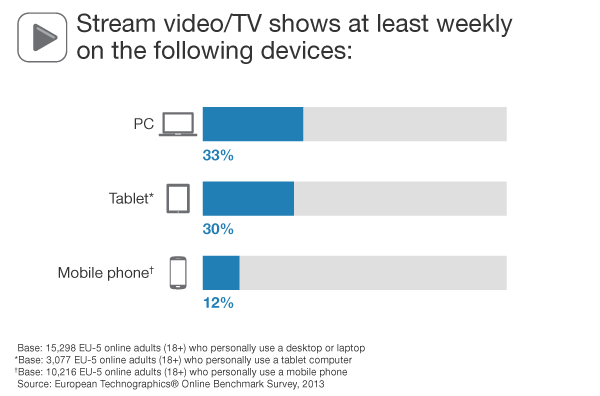 A recent Forrester report, The State Of Online Video Advertising In Europe, 2013, indicates that this reflects not only consumer preferences but also a lack of available inventory dedicated to mobile as well as a poor user experience for mobile-enabled videos. Facebook, take notice. As my colleague Luca Paderni argues, “Eager to catch more eyeballs, publishers and marketers alike have often overlooked critical factors such as user experience.” To break this vicious circle, smart marketers need to upgrade their online video strategy and focus on making the most of the video assets and creative resources they have available today.