At the intersection of technology, mobility, and consumer centricity, the automotive industry is kicking into gear. From the International Consumer Electronics Show highlights early this year to commercials aired during the nightly Winter Olympics coverage this week, it’s hard to miss the news and promotions around increasingly sophisticated in-car technologies. Vehicles are:

Mobile technology (quite literally) is revving up, and for consumers, in-car technology is becoming a standard expectation rather than a nice surprise. In fact, Forrester’s Consumer Technographics® data shows that automotive technology plays an influential role in the customer purchase process. Around half of US online consumers currently in the market for a car say that a vehicle’s digital capabilities are important factors in their ultimate purchase decision: 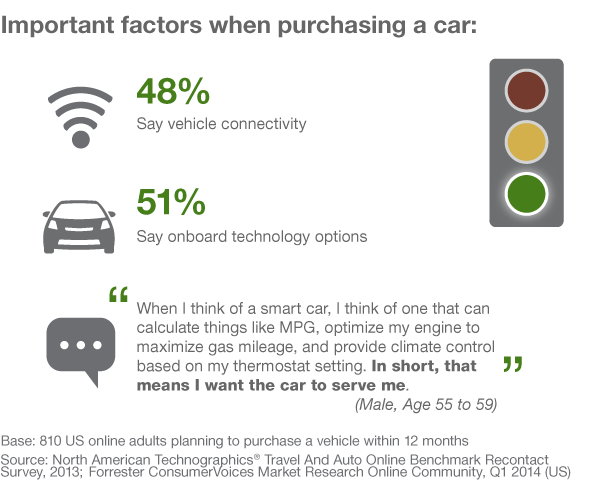 According to a recent Forrester report, “the widespread addition of connectivity to vehicles will catalyze seismic shifts in the industry . . . even car owners will, over time, think of their transportation in a fundamentally different way.” With the demand for in-car technology edging into the consumer majority, a vehicle’s perceived value is already evolving. Automotive industry strategists and marketers need to stay on top of or ahead of consumer expectations in order to deliver relevant product experiences.