Walt Disney once said, “of all our inventions for mass communication, pictures still speak the most universally understood language.” Perhaps he was more prescient than anyone realized at that time: Decades later, the onslaught of social media and the emergence of mobile phones have made his assertion seem truer than ever, as consumers have gained the tools to share a picture with the global population in a matter of seconds. Today, the fascination with pictures has come to define communication that spans both the offline and online worlds.

According to Forrester’s Consumer Technographics® data, sharing visual content is indeed a universal phenomenon — but it is most prevalent in countries like China, India, and Brazil: 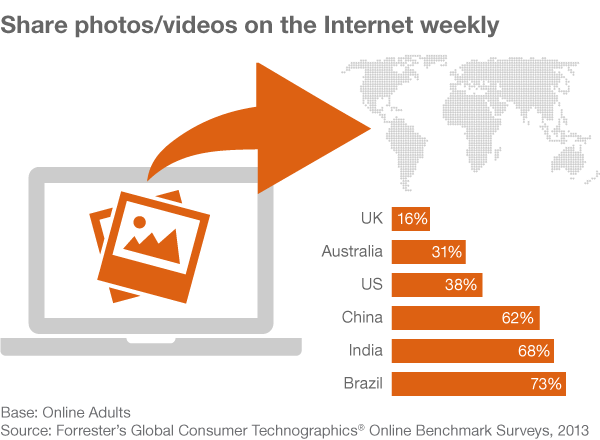 Some believe that our obsession with taking and sharing photographs speaks to a modern narcissistic culture. Indeed, Pew Research reports that the majority of Millennial consumers post “selfies” on social networking sites. However, when Ellen DeGeneres’ Oscar “selfie” became the most retweeted tweet ever this week, narcissism was hardly part of the conversation. Instead, Ellen’s post exemplified what can happen when the power of the picture meets the power of social media: large-scale awareness, excitement, and engagement.

Companies that recognize consumers’ propensity to share photos through social media strategically leverage this behavior. For example, Sephora recently extended an Instagram-like feature on its mobile app to loyalty program members, which allows customers to upload their personal photos to a “Beauty Board” from where they can also discover new looks and make purchases. An article in The New York Times indicates that hundreds of other high-end and mass-market retailers are connecting with their customers by exchanging photos on popular social platforms.

In her recent report, my colleague Gina Fleming notes that “online access from smartphones and tablets continues to climb [and] . . . as all generations embrace an increasing number of connected devices, companies need to leverage these connections to increase the value they bring to their customers [and] grow customer loyalty.” Although technology continues to evolve, the desire to engage and communicate through visual content remains constant — just ask Disney. As marketers harness new technology to engage with their customers, they should be careful not to forego the essential messaging techniques that resonate most.