Ever since Facebook CFO David Ebersman admitted last October that young teens were visiting the site slightly less frequently, most have accepted as fact that young people are fleeing Facebook en masse. Ivy League researchers have forecast that the service will be all but dead by 2017; President Obama recently claimed that young people “don’t use Facebook anymore”; and when comScore recently reported that fewer college students were using Facebook, media outlets ran stories on the “social platforms college kids now prefer.”

But if you take a closer look at the data it tells a very different story. Sure, many data sources show that Facebook’s usage among young people has declined slightly — but the drops are small, and the huge majority of this audience still uses the site. For instance, that comScore report only found a three-percentage-point drop in college-aged adults’ Facebook usage and reported that 89% of this audience still used Facebook — far more than used any other social site.

To investigate teens’ social behaviors further, we recently asked 4,517 US online youth (aged 12 to 17) not just whether they use social sites like Facebook, Instagram, Snapchat, and Tumblr — but if they use those sites “about once a day,” “at least a few times each day,” or even if they were on any of the sites “all the time.”

The results were clear: Facebook remains young users’ favorite social network. More than three-quarters of online youth use Facebook — twice as many as use Pinterest or Tumblr or Snapchat, and more than use Instagram and WhatApp combined. And 28% of young users who are on Facebook say they use it “all the time,” a higher percentage than said this about any other social network. 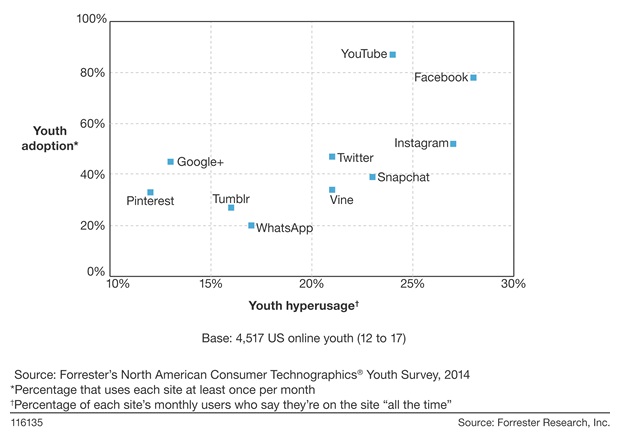 The bottom line: The sky is not falling. Facebook does not have a problem attracting or retaining teen users.

For more data and findings, Forrester clients can read a new report by me and Gina Fleming — Brief: Facebook Dominates Teens’ Social Usage.

Nikhil Lai 20 hours ago
The question I’m asked most often is “Is retail media overhyped, or is it the next big thing?” This question comes, in part, from media coverage and forecasts, including Forrester’s, that project a significant share of ad spend — nearly $100 billion, according to Boston Consulting Group — being absorbed by retail media networks (RMNs) […]
Read More
Blog

Stephanie Liu 22 hours ago
In the era of data deprecation, many B2C marketing clients are asking me “How can I get more first-party data?” or “How do I get more customers to share data with me?” It’s a valid question and a totally understandable one. A common recommendation (including from Forrester) to contend with the loss of third-party cookies, […]
Read More