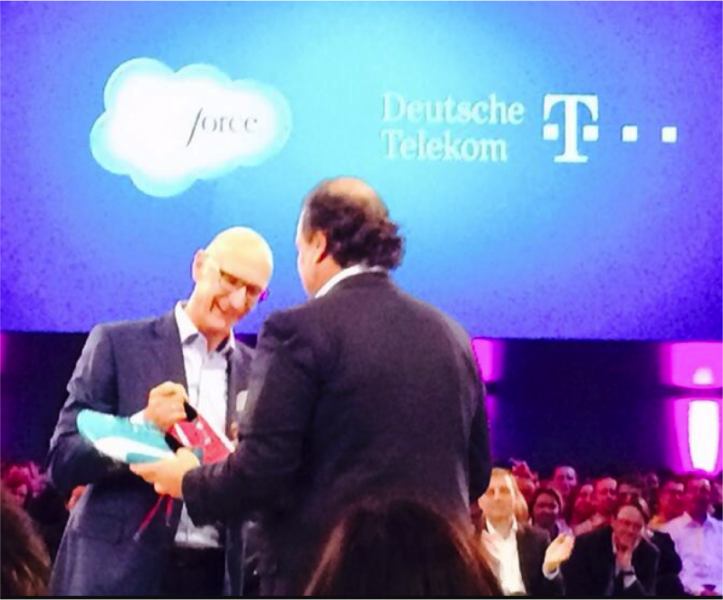 There are a couple of announcements today at salesforce.com’s local marketing event in Munich. Definitely the most important one — and the one that customers have been eagerly awaiting — is the joint announcement from Salesforce and T-Systems, the systems integration branch of Deutsche Telekom (DT). Earlier, Salesforce announced that it’s planning to build a data center in Germany, which is definitely the best way to comply with German data privacy laws and the emotional concerns of German customers around privacy. But as a US-headquartered company, just operating a data center is not enough; companies need to create trust and have experience in fulfilling legal and regulatory compliance mandates. This makes T-Systems exactly the right partner for Salesforce: It’s big enough to compete with data center heavyweights like Fujitsu, HP, and IBM but local enough to understand German customers and law.

Let’s look into more details of T-Systems’ offering how it relates to salesforce.com. First of all, it will simply feel like any other Salesforce data center. Customers will see absolutely no difference, regardless of whether their “tenant” is running on the East Coast, West Coast, or the US-based data center dedicated to European customers. In the future, they can choose the Salesforce UK data center and, starting in 2015, a Salesforce Germany data center. All are fully managed by Salesforce, operate on the same code base, and will get new releases and upgrades at the “same” time.

T-Systems is known for its systems integration business, some traditional outsourcing, and the strength of its multibillion-euro business around managed services for SAP solutions. Over the past few years, T-Systems has added modern infrastructure-as-a-service offerings that Forrester would consider virtual private clouds compared with the aggressive pure public cloud model of providers such as Amazon Web Services. However, the landscape of vendor offerings has changed significantly over the past two years, putting major systems integrators (SIs) and hosting providers such as T-Systems under even more pressure. Many software makers — and now finally even SAP, with its Hana Cloud — have gotten serious about software-as-a-service (SaaS). On the other hand, AWS has increased its understanding of the privacy requirements around delivering virtual private clouds in Europe. A partnership approach with the major public cloud SaaS vendors is exactly the right way out, as:

While this is a dramatic move on the part of T-Systems, I think it’s a very smart one. It will also bring major change to salesforce.com in Germany:

Now, time-to-market matters for both Salesforce and DT. Today’s announcement is one that looks forward to 2015. DT needs to keep its commitment to its T-Systems branch, and Salesforce needs to stay focused on “understanding Germany.” If both companies continue to evolve the partnership, they have the potential to deliver a Salesforce breakthrough in Germany.