My sister used to tell me that I wasn’t smart I was just organized.  I’m not here to argue (anymore) but I have never forgotten her claim. In fact, it’s true for more than just me.  It’s really what is at the heart of smart cities. It’s not about what you know but what you can do with it. The industry has been pushing “smart” on cities for a half a decade.  But the most successful stories about cities cutting their cost of operations and improving the lives of their citizens are about being better organized or more efficient. 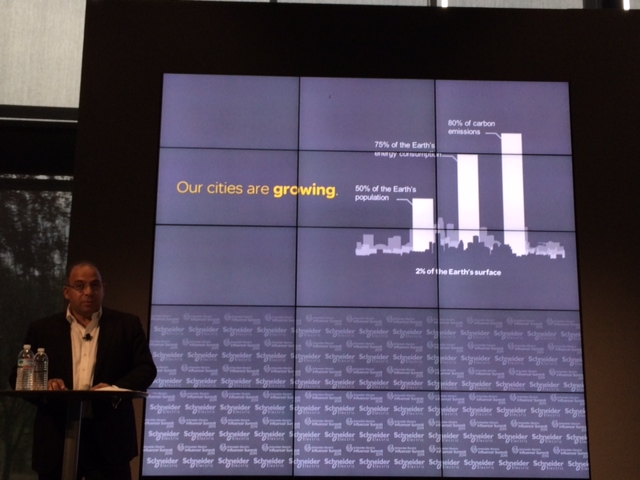 At the Schneider Electric Influencer Summit in Boston this week, Schneider execs and customers focused their smart city story on just that – getting more efficient. We all have heard the numbers: cities take up only 2% of the world’s surface but they consume 75% of the world’s energy and account for 80% of the world’s carbon emissions.  As the Schneider CMO cited, “If left unchecked, our appetite for energy will grow 50% by 2040.” And there is significant room for greater efficiency. The sweet spot for Schneider in this Next Age of Change is in helping cities control their public energy consumption.  While their vision  – and “marketecture stack”  – extends into water and other domains, they plan to establish their footprint with energy efficiency.  Phew! That’s a refreshing change from vendors who want to do it all.

Schneider comes from an industrial background. They know how to automate and monitor operations, anticipate and resolve problems before they happen, and translate insights into process and policy change –ultimately improving efficiency.  They’ve done this in factories, in data centers, and in buildings, which is where they have started in cities.  City governments are often the largest property owners in the city, and municipal buildings are notoriously older and less efficient.  We’ve all gone into a creaking city building at some point whether it’s the city hall built in the last century or a library or school built in the 60s.

Transitions into new markets are not easy.  And, Schneider did have a ways to go. Several years ago Schneider’s strategy was to move “from shop floor to top floor” – leaving behind the operations guys and instead focusing their messages on the executives.  In cities, that translated to “from the street to the mayor’s office” – but with a recognition that they needed to address both.  Strong leadership is often a pre-requisite for a project yet you must also enlist the support of those in the trenches, or across city departments.  Leadership likes the vision; those on the ground like getting their jobs done more easily and more cost-effectively.  So this year the new marching orders at Schneider are to “talk to the top but work from the bottom.”  And, that appears to be working.

The event spotlighted the City of Boston’s efforts to pursue energy efficiency, presented by the city’s Energy Manager.  Those efforts were started by the previous administration with the mayor’s 2007 Executive Order on Climate Change which established a target of 80% reduction in CO2 emissions by the year 2050 and created the Climate Action Committee to make recommendations for the city and the Energy Management Unit to lead the operational charge.

Todd Isherwood, from Energy Management Unit, spoke of their program which includes identifying opportunities and enlisting the stakeholders from utilities, budget management, capital construction and other city departments – this is not an exercise to be done alone.  From there, the next steps were to benchmark city buildings and prioritize energy efficiency projects, retro-commissioning and building automation systems across older buildings.  For new buildings they have integrated energy audits into the capital planning process.  A Building Energy Disclosure Ordinance will soon go into effect.  And the Greenovate program was launched to enlist the efforts of all Bostonians. Apparently these efforts have not gone unnoticed, as Boston was recently named the most energy-efficient city in the US.

There are a lot of potential measures of “smart” – and Boston certainly measures up by many of those.  But being efficient is a great place to start.

I look forward to hearing the results of these efforts, and those of other cities Schneider is working with.