In 2015, wearables will hit mass market: With Apple’s much-anticipated Apple Watch slated for release early next year, the already hype-heavy conversation will reach new heights. My colleague Anjali Lai wrote a report analyzing the true addressable market of Apple Watch from a quantitative and qualitative data perspective – covered right here on the Data Digest – to interject some strong data-driven analysis into the conversation.

In a major new report – and in a speech given at the influential Le Web conference as part of a theme on wearables curated by my colleague and collaborator James McQuivey – we argue that there are five urgent truths every leader needs to know about wearables. Before we jump into those truths, we want to make it clear that Forrester doesn’t advise companies to devise an independent “wearables strategy” divorced from an overall approach to mobility; my colleague Julie Ask has written extensively about how companies should look at wearables in the context of mobile moments – specifically, the micro moments that are most amenable to wearables. It's part of the mobile mind shift that Forrester has identified and analyzed.

But once you’ve done that exercise, and decided that it makes sense to double-click on wearables, there are five urgent truths you must take into account as you weave wearable devicess into your mobile strategy.

While wearables have indeed suffered from a hype bubble, demand for them is real. Yes, Nike’s walking away from Fuel Band, but Apple, Microsoft, Google, Samsung, and Salesforce.com all are making major commitments to the market. And their interest is merited, as Forrester’s Consumer Technographics data shows: 45% of US and 32% of European online adults say they are “intrigued” by the prospect of getting a wearable device. For the first time today, we debut the full US and EU data on consumers’ interest in wearable devices worn on various parts of the body: 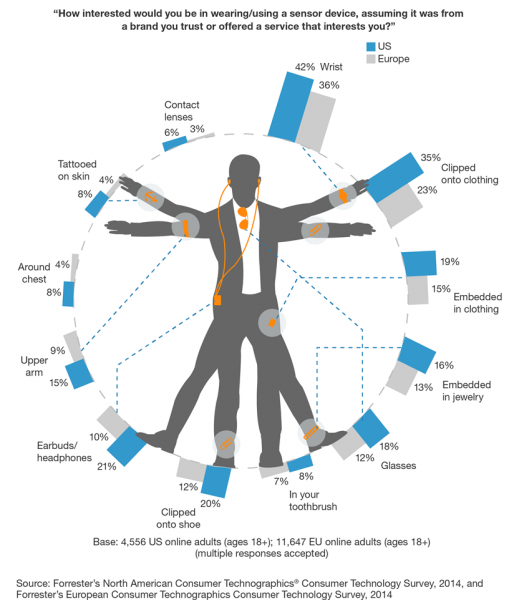 CMOs building a digital business strategy should take note. Notice some of the hot spots:

Of course, there are 4 more urgent truths about wearables. If people want them, then businesses want them even more – and they’ll equip workers, then create new business services and models based on wearables. And you'll be surprised where wearables show up, and how they connect to what we term the All-Body Network. To get insight into the rest of these urgent truths, please read and download our major new report here: Five Urgent Truths About The Future Of Wearables That Every Leader Should Know.

J. P. Gownder is a vice president and principal analyst serving Infrastructure & Operations Professionals. Follow him on Twitter at @jgownder

Carlos Casanova August 4, 2022
The 2022 AIOps NowTech generated a wealth of data that has been captured in the AIOps Data Overview, Q2 2022 report about AIOps software vendor capabilities. Three items from the overview report; digital experience, OpenTelemetry, and audit trails are highlighted in this blog. Read the full data overview report to learn more about the other capabilities that it covers.
Read More
Blog

Jay Pattisall July 25, 2022
The rise of data intelligence in the creative process will be as transformative as the creative advertising revolution of the 1960s.
Read More