As I’m writing this blog post on December 30, I don’t yet know how many messages will be sent on New Year’s Eve this year. But looking at the data from recent years, we can expect a huge number of good wishes to be shared digitally during the final minutes of 2014 and the early hours of 2015: WhatsApp processed 18 billion messages on New Year’s Eve 2012 and 54 billion on December 31, 2013!

However, it’s not just the number of messages I’m interested in this year: I’m also keen to see the influence on these numbers of Facebook Messenger’s rollout earlier this year and its subsequent uptake. Our European Consumer Technographics®Consumer Technology And Telecom Survey, 2014 clearly shows that Facebook Messenger and WhatsApp dominate the messaging landscape in Europe, with Skype in third place. 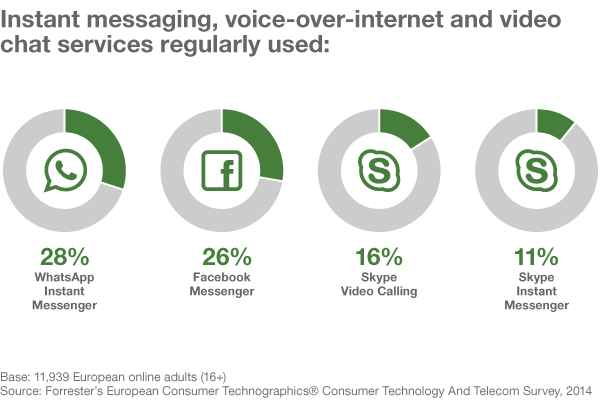 Facebook Messenger and WhatsApp show similar levels of uptake at the European level, but we see surprising variations at the country level. For example, WhatsApp clearly dominates the messaging landscape in Spain, Germany, and the Netherlands, while Facebook Messenger leads in the UK, France, and Sweden.

Marketers should closely follow consumers’ uptake of messaging services. As my colleague Thomas Husson says in his report Messaging Apps: Mobile Becomes The New Face Of Social: “If you think messaging apps are just a free way to communicate, you're missing their potential: They're mobile's Trojan horse and serve as portals for content and one-to-one interaction with friends and fans.”