Skip to content
< Blogs
Home > Featured Blogs > My Next Chapter 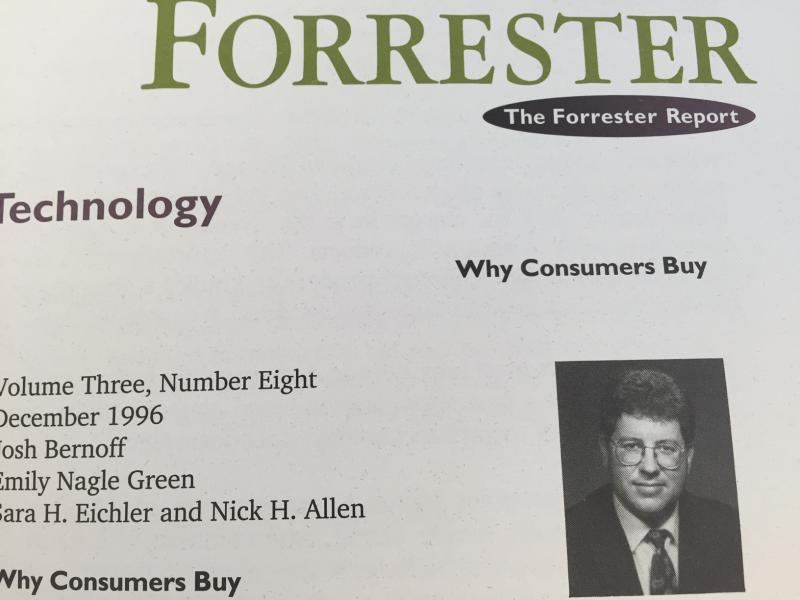 I spent the last 20 years working at Forrester Research. My work here is my legacy. Now it’s time to move on. I’ll be leaving the company on March 2.

Let me get into two things: what we did together, and what I’ll be doing next.

I joined Forrester in 1995, when the Web was new and there were only 65 people here. Forrester offered me the opportunity to think big about the changes that technology would bring to the world of business.

I was inspired by the vision of CEO George Colony and his band of analysts. The spirit of Forrester’s current tagline — “Challenge thinking. Lead change.” — pervaded the place. Change was coming, we could see it, and I got to research it and write about it. We spoke with and influenced the brightest minds in business, in big companies and in startups. It was a heady thing to be a part of.

Forrester is now and always has been a crucible for ideas. Whatever technology or industry expert you need, she’s three desks away, or you can reach him with a video call. Forrester’s people now number over 1300, with offices around the world.

I got to do some amazing things. My first report predicted that advertising would generate the money for content online — a daring idea at the time, but one that proved prescient. I worked with the formidable research director (and later Forrester president) Bill Bluestein to develop a consumer segmentation called Technographics, which grew into Forrester’s data business. I analyzed the television industry for a decade.

Forrester made it possible for me to be an author. George embraced and endorsed my desire to write books. I wrote Groundswell with Charlene Li, Empowered with Ted Schadler, and The Mobile Mind Shift with Ted and Julie Ask — and I edited books by Harley Manning, Kerry Bodine, and James McQuivey. Those collaborations were the most fulfilling projects I’ve ever done. For the last two years I’ve also worked to fan the spark of some of our analysts big ideas.

None of this would have been possible without the great company George Colony created, and the countless great research, marketing, and sales folks and clients who helped shape my ideas and put up with my idiosyncrasies in the last 20 years. For everything I’ve been a part of — and there’s a lot of valuable stuff in there — much of the credit goes to their leadership and their faith in me.

After 20 years, it’s time to take a break. I’m done with business strategy and analyzing technology. I’m a freelance writer and author now — look for my byline, and for more unusual and challenging ideas. If you’d like to be part of the next stage in my journey, follow me on Twitter.

Jess Burn 6 days ago
Apple announced on September 12 that its email clients for iOS 16 and macOS will support a broad industry effort to combat brand spoofing and impersonation by implementing Brand Indicators for Message Identification — BIMI for short. This announcement further reinforces Apple’s commitment to security and privacy for its users and its earlier Lockdown Mode […]
Read More