The 2015 Super Bowl had 114 million viewers – making it the most watched television event in US history according to Nielson data. Forrester used its Technographics 360 approach, which combines multiple data sources, to understand how consumers used their smartphones on the big day.

Forrester tracked the smartphone behavior of 879 US online smartphone owners (18+) during the dates surrounding the Super Bowl as well as on the day itself. To better understand these mobile behaviors and add further context, Forrester engaged a group of 157 US participants (18+) in our ConsumerVoices online community. Finally, to capture the nature of public conversation overall, we leveraged social listening to explore topics and sentiment throughout the day across US consumers’ social media posts.

We found that on the day of Super Bowl 2015, consumers used the same apps that they do on a normal day, but certain mobile sites saw large increases in traffic. In particular, sports, food/drink, reference, health/wellness, shopping, and weather websites saw more visitors – in some cases, double the usual traffic. 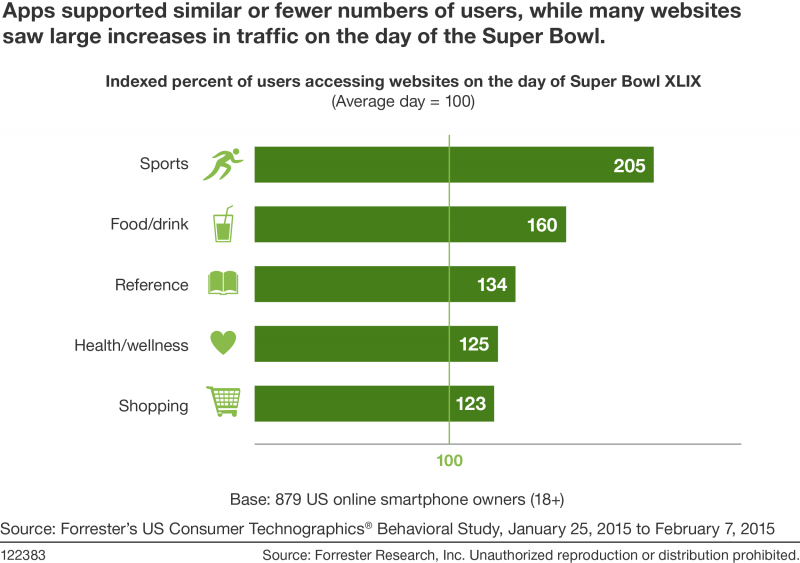 Between the kickoff and the end of the game, we found that consumer behaviors diverged. While plenty of football fans tuned in for the game itself (and mostly stayed focused on it), smartphones made multitasking behaviors widespread among more casual watchers. Specifically, our smartphone behavioral tracking data reveals that women were more likely to entertain themselves during air time with gaming and shopping apps (often unrelated to the game or commercial content they were watching). These less committed watchers reported actively looking for a distraction during the game. Marketers: Give them what they want! Go beyond hashtags and develop more creative extensions: Mobile games, limited-time offers or coupons, and microsites containing additional information will offer more opportunities for brand engagement with this forgotten audience.

For more information on the smartphone activities of consumers during Super Bowl 2015, read my latest report cowritten with my collegue, Kris Arcand: Keeping Score Of US Smartphone Usage During The 2015 Super Bowl Event.

Not a Technographics client and interested in accessing rich behavioral data metrics and insights? Contact us at data@forrester.com.

Tina Moffett 6 days ago
Marketing analytics is the practice of measuring, managing, and analyzing data from marketing initiatives — including channels, programs, campaigns, and tactics — to improve marketing effectiveness and identify opportunities to optimize short- and long-term objectives. You probably already have basic marketing measurement approaches running — whether it’s last-touch or a 30/60/90-day analysis of your email […]
Read More