Gone are the days when the only signal a streetlight sent out was that it was time to go home on a summer evening.  Many kids grew up with that rule.  My mom had a cowbell, which was infinitely more embarrassing but likely more effective in calling us home. But times have changed. We now text our kids to get them home for dinner.  And, street lights themselves would no longer deign to serve just that purpose.

Streetlights these days do provide light (and do that much more efficiently), but they just might be your source of Wi-Fi or of information on the weather, air quality, traffic, and parking availability, or might be the city’s source of information on you.  They will also be a platform for new services that leverage all of the data the new light poles collect through their embedded sensors, or also a source of electricity to power digital signs through solar-energy. These new and improved streetlights are becoming increasingly popular as they demonstrate a clear cost-savings over their predecessors and promise the potential for revenue generation through new applications and services.  That is a win-win for cities, citizens and the ecosystem of potential application and service providers out there.

The implementation of these new lights, however, does not necessarily come without glitches.  Fortunately, the lights themselves can be smart enough to help resolve the issues.  But the city will only benefit from all those smarts if the right foundations are in place.  In my upcoming report on smart cities, I look not only at this new sensor-enabled infrastructure but also the foundational systems of the city, and how they all interact to generate the insights needed to truly make the city smart.  The smart city dialogue has focused too much on the new systems of automation. What’s really interesting and exciting is how cities upgrade their legacy systems of record (yes that can be exciting), establish strong systems of engagement with citizens, and then add in the smart infrastructure or systems of automation. The data generated from transactions, engagement, and the context of the sensors powers the system of insights that drives better actions and outcomes across the city. And, that’s what happened in Buenos Aires.

Shedding Light On A Mystery 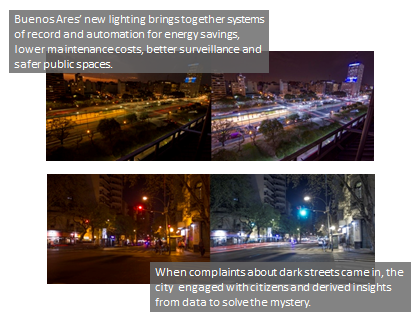 In Buenos Aires, the city replaced majority of the 125,000 existing street lights with new LED luminaires.  The new lights are expected to drive energy savings of over 50% for the city, a significant reduction in CO2 emissions every year, and offer a lifetime that is five times longer than conventional lighting.  The lights can also be remotely controlled, switched off or dimmed, depending on specific requirements, thus dramatically reducing energy consumption. All of this reduces the environmental impact of the lighting system and reduces maintenance costs for the city of Buenos Aires. Sounds good so far!  The white light of LED lighting also illuminates better, improving facial recognition and color perception, not only by the human eye but also by security cameras, strengthening crime prevention.  Another plus!

City leaders expected the improved visibility and security would enable people to better enjoy public spaces. But instead they got a lot of complaints about dark streets. It was a mystery. These lights were supposed to make the city less dark. So the city collected the complaints over a period of time, and eventually analyzed them. When and where were people complaining?  Could the lights provide insights into the weather or traffic patterns or other factors affecting their ability to illuminate?  What the city found led to a simple solution. Complaints were happening in the summer and on streets with more mature trees (they also have a canopy inventory).  LED lights point down and the light does not radiate as much as traditional lighting.  In general that’s good. Less light lost. But the light doesn’t get around leafy trees in the summer, giving the impression that the streets were dark.  So they set about pruning the trees to let the light through.  OK, so the light posts didn’t play an enormous role here but you can imagine they could – perhaps sending the message that their friendly arboreal neighbor was encroaching on their space.

The power of this example is how Buenos Aires combined citizen input and city data to solve the mystery. This is not only an example of more efficient operations, optimization of assets – by replacing traditional lights with LED – but also of citizen engagement – capturing feedback from citizens – and data-driven government to solve the mystery of dark streets.