Back in 2013, we conducted a study to figure out how the “summer of Snowden” was affecting consumer opinion on privacy. A year later, we combined that data with a current pulse of consumer sentiment, and found that mainstream attitude signaled imminent behavior change.

Fast forward another year: Today, US presidential candidates are talking about privacy and personal data protection during the pre-primary season. We have recently witnessed three more major data breaches affecting millions of Americans. The adblocking debate is at fever pitch, while Internet giants make privacy a point of differentiation. So, we ran our study a third time, and incorporated behavioral tracking data into the methodology.

Our findings? Consumers are more willing than ever to 1) walk away from your business if you fail to protect their data and privacy; 2) adopt technologies like tracker-blockers and VPNs to limit their exposure to data misuse; and 3) extend their protective actions to the physical realm. And, Forrester’s Consumer Technographics® data shows that this story pertains to millennials and their older counterparts alike: 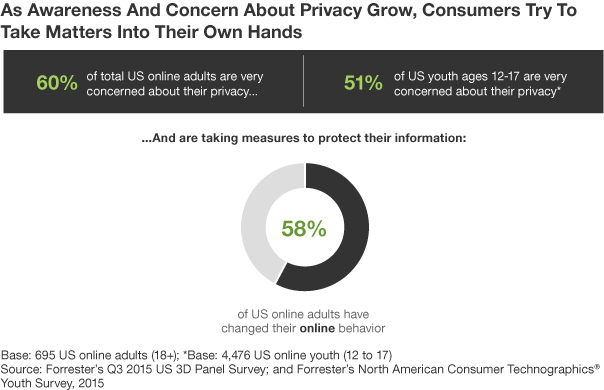 Pundits like to say that privacy is dead. But our data shows that privacy is very much alive – and research indicates that it’s set to become a major competitive differentiator in the years to come. Insight that merges consumer attitude and behavior tells a story that organizations must heed as they develop their data strategies today.

Kim Herrington 6 days ago
Get seven actionable tips on how to improve your data storytelling in this preview of the upcoming Data Strategy & Insights event.
Read More
Blog