Here’s an interesting discrepancy: Marketers and agencies fuss over how many people subscribe to a brand’s YouTube channel. Yet, the ease of subscribing suggests little commitment, and YouTube buries notifications of new videos from subscribed channels.*

Thus, in the context of a report I’m writing, I hypothesized that YouTube subscribers were worthless; brands that had collected thousands of subscribers had only a number. Nothing more.

And I tested the hypothesis.

Here’s where that got me for 20 of the most well-known video publishing brands; the left axis shows the maximum percentage of nominal subscribers who view an average video. 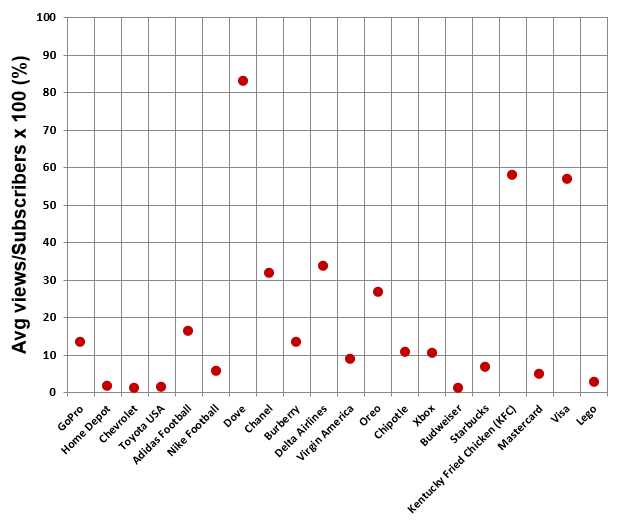 Most brands saw less than 20% of subscribers come back to watch their videos. In fact, it is likely the return rate is far, far lower.**

What this means: YouTube subscriber totals are merely an artifact for past video views on the channel. There is very little grounds to connect it to any future behavior, or value.

If you’re a marketer, you shouldn’t avoid gaining subscribers. But don’t consider it either a short-term or long-term objective.

Subscribers are NOT cash in the brand bank. Because no deposit was ever made.

*Once you click ‘subscribe’ on a YouTube channel, all new videos from that channel will appear if you click ‘Subscriptions’ in the left-hand navigation menu of YouTube. Further, subscribed channels appear further down that same menu. Users have the possibility of exporting their subscriptions via RSS, which could conceivably push to email; since Google killed Google Reader, RSS readers are little used. And Google doesn’t automatically send email notifications of new videos, which would populate, for example, the ‘Social’ inbox of the YouTube user’s Gmail account. My assumption is that very few YouTube users use navigation menus on the site at all, and very, very few bother to play with their subscription settings.

**This analysis was aimed, within the constraints of the data that I could access, to establish the maximum possible rate of subscribers returning to view videos on brand channels they had subscribed to. The two week to 12 month time frame was designed to give subscribers a time frame to view videos after their publication, and maximize the total percentage of views likely from subscribers. With that said, subscribers account for only one source of a YouTube video’s views (other sources are people who simply came directly to the video via YouTube navigation, YouTube side-rail placements, YouTube channel home-page views (autoplay), embeds elsewhere on the web and any and all forms of paid promotion. Some videos collected were thrown out of the analysis, if review of their viewership reflected clear and massive paid promotion (12 million paid video views quickly skews results). It should be noted that many of the videos that were included in the analysis, probably received some paid promotion, if not extensive paid promotion. In other words, the percentage of total subscribers who returned to view videos from brand channels they’d subscribed to is in all likelihood far, far lower than the figure represented in the chart (due to limitations in how public YouTube data can be collected).

Michael O'Grady 2 days ago
In 2023, we anticipate that two-thirds of global B2C e-commerce will come from online marketplaces.
Read More
Blog