The dust is settling after last week’s exciting Super Bowl. Emotions certainly ran high for those watching the game. Here at Forrester, we were also interested in the longer-term sentiment about the ads that aired during the show. So we reached out to consumers again after a week to capture consumers’ reactions to the Super Bowl ads, to ask them which they liked most, and to ask which made a lasting impression.

As my colleague Jim Nail pointed out in a blog post , this year’s ads did not always resonate positively (if at all) with audiences. That said, our ConsumerVoices market research online community members were most likely to mention 84 Lumber, Audi, and Anheuser-Busch/Budweiser as memorable ads that influenced their opinions of the respective companies. 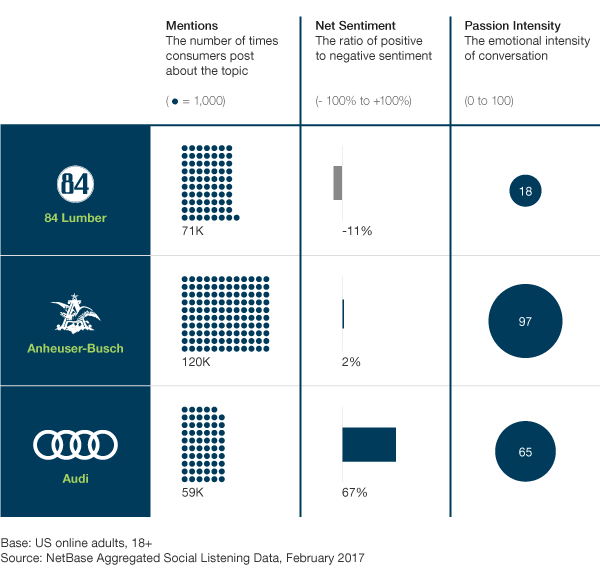 In the case of 84 Lumber’s and Anheuser-Busch’s focus on immigration, sentiment was sharply split. Quite a few consumers were further turned off when 84 Lumber’s CEO declared that the ad was not intended to be pro-immigration, adding more confusion to consumers’ perception of the brand and its values. On the other hand, Audi’s ad addressing gender equality in pay sparked a different controversy. Although Audi is an aspirational luxury brand, the message was seen as bold and received in good faith, producing a more positive sentiment overall.

Our ConsumerVoices members were equally torn on the subject. Even if these ads made an impression, the general takeaway was that they didn’t like companies to lecture them. However, there were members who valued the brands for taking a stand. In particular, Audi got lot of accolades for bringing the topic of gender equality to center stage: 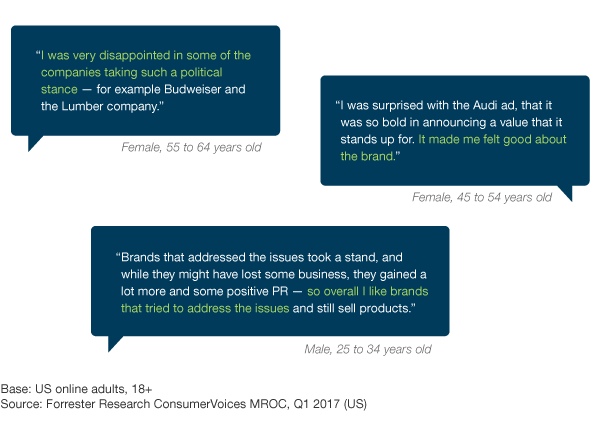 Not a Technographics client and interested in accessing qualitative consumer insights and social trends? Contact us at data@forrester.com.