Skip to content
< Blogs
Home > Featured Blogs > Forecasting In Uncertainty: Too Soon To Declare The Worst Is Over In The US Tech Market Downturn

Remember the old Road Runner cartoons where Wile E. Coyote runs over a cliff chasing the Road Runner then hangs in midair for a couple of seconds before plummeting? Right now, the tech market reminds me of that cartoon. Recent tech vendor earnings and other data suggest the pandemic recession’s damage to the US tech market was not that bad and perhaps improving. For example, in August, Salesforce reported a 29% increase in its quarterly revenues ending in July compared with the same quarter a year ago, and Workday announced a 20% increase in revenues over the same period. In September, Oracle reported that its Fusion and NetSuite ERP subscription revenues in the quarter ending August 2020 were 33% and 25% higher, respectively, than a year ago (though total cloud software services and license support revenues only went up 2%, in line with growth rates over the past year). Adobe’s revenues for the same period rose 14%. And the Q2 2020 data on US tech investment released in late July was surprisingly strong.

As much as all of us in the tech industry hope that this is a harbinger of a strong and rapid recovery, I think the worst still lies ahead. The US pandemic recession has so far been very different from past recessions. This recession slammed certain US industries very hard but so far has had a relatively light impact on other industries. I’ve written about this industry variation in past blogs. But US employment data in August 2020 reveals new insights about the industries that’ve been hit hard and about those that have escaped damage — so far. 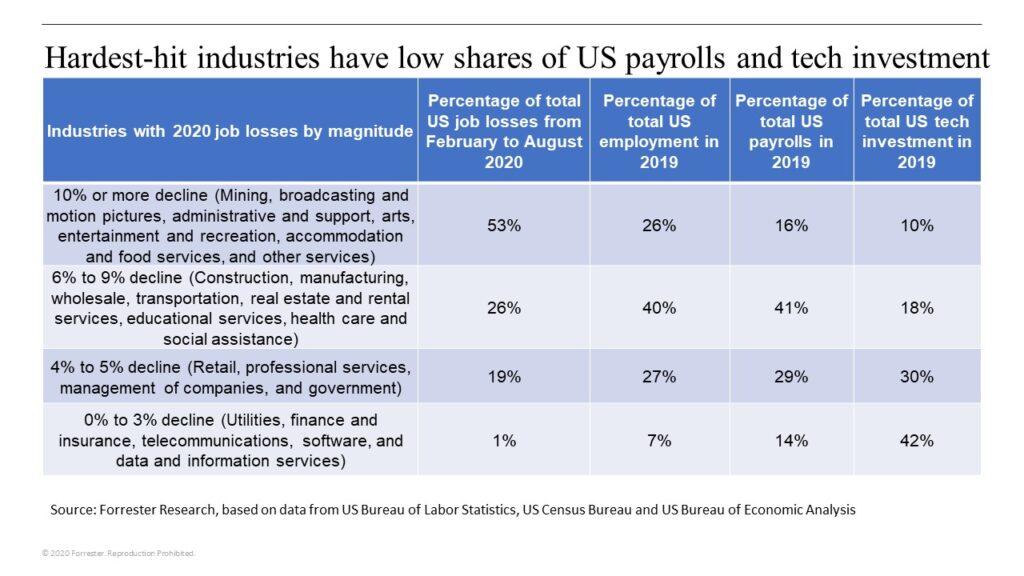 Michele Goetz 11 hours ago
2023 predictions for data mesh: Clarity, challenges, more confusion, and opportunities are all just part of the journey.
Read More