Today HP launches the HP TouchPad, the first tablet based on HP's new operating system, webOS, which it acquired along with Palm exactly one year ago. HP's $1.2B initial investment in Palm, plus its additional investment over the past year to bring the TouchPad and its webOS smartphones to market, is a risky investment — there's no guarantee that consumers will buy these products or that the consumer electronics market has room for another software platform. But the webOS investment is a risk HP had to take, in order to:

The TouchPad is a good product. The hardware is solid — HP didn't skimp on the screen quality, and the device feels solid and well balanced to hold, similar to the first-generation iPad. The webOS software is more polished than Honeycomb, and overall the TouchPad is a better product than any Android tablet on the market. With 300 TouchPad apps at launch, HP won't win the app numbers wars, but I like HP's approach of focusing on quality rather than quantity — it's easier to find quality apps on the TouchPad than it is on an Android tablet or the BlackBerry PlayBook, which had 3,000 apps at launch. And the Pivot "magazine" that highlights featured apps in HP's App Catalog is a nice touch. But it's unclear how many consumers will opt for this first-gen HP tablet. In an online survey of 4,564 US consumers that Forrester conducted in May and June 2011, we found that beyond the iPad, consumers' preferences for which tablet to buy are extremely fragmented, and HP doesn't stand out from the pack, with only 7% of consumers considering buying a tablet saying they'd consider buying a TouchPad: 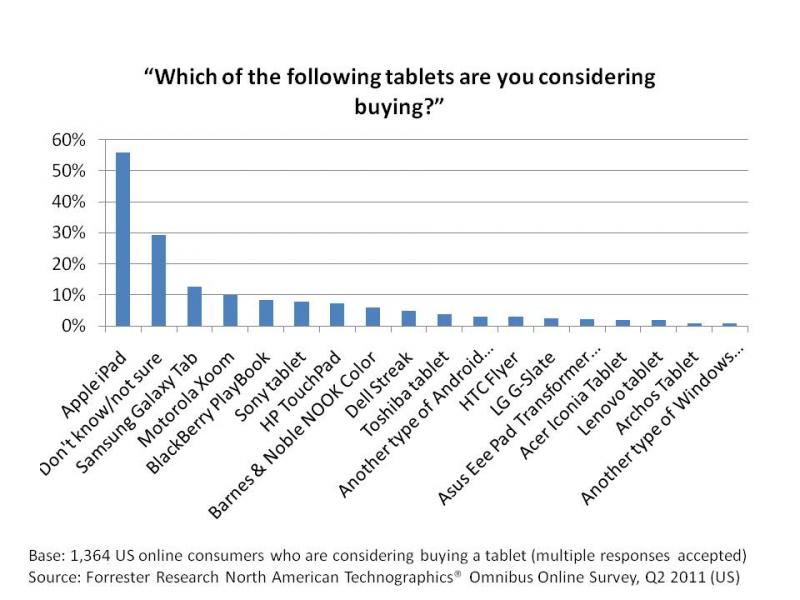 There are some big unknowns that will impact whether HP's webOS bet will pay off or not. First, we've yet to see HP's marketing and channel execution for the TouchPad. Second, we don't yet know the extent of webOS licensing to other OEMs — if reports of OEMs like Samsung licensing webOS are true, that could substantially increase the install base of the platform and its appeal to app developers. Third, we haven't seen Windows 8 tablets hit the market yet, which may leave the TouchPad in the dust.

The bottom line: In 2011, the TouchPad has a shot to be the No. 2 tablet for consumers, far behind the iPad but ahead of RIM and Android competitors. In 2012, the game changes with Windows 8. If webOS survives the platform wars beyond that, HP will have an important asset to differentiate itself from other OEMs and to compete in the post-PC era.