Question: What do Ken Jennings, Brad Rutter, and a computer named "Watson" all have in common?

Answer: The two humans and computer will all compete on the US game show Jeopardy! the week of February 14, 2011.

In case you're not a Jeopardy! fanatic, both Ken and Brad are previous Jeopardy! champions, and they're credited with some of the longest winning streaks and largest take-home earnings in the game show's recent history (see endnote 1). 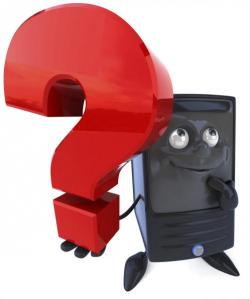 And here's the scoop on Watson:

For over three years, IBM has been developing what they call the "world’s most advanced question answering machine, able to understand a question posed in everyday human language and respond with a precise and factual answer" (see endnote 2).

IBM says Watson rivals a human's ability to answer questions posed in natural language — rather than computer code — with speed, accuracy and confidence. Unlike earlier computers, it can deal with Jeopardy's! subtleties of language, including puns and riddles.

If you think about it, answering a question like, "What is the capitol of Germany?" is pretty straight forward. But it's more complex when a computer has to reply to, "This measurement of cloth is equal to 40 yards." (Answer: What is a bolt?) (see endnote 3).

The technology running Watson is certainly impressive, but it does have its limitations. For example, the computer has to "read" the question in its entirety by receiving a text/SMS message from the producers. Its human competitors can quickly scan the question board while the host reads the question out loud and buzz in (so I predict that Watson will only ring in first when its human competitors don't know the answer). Another limitation is Watson's reliance on the knowledge it already has loaded into its hard drive. It only knows what it knows (but I guess that's a limitation for all contestants, and all of us really). Additionally, I have no idea how they're going to handle Final Jeopardy and Double Jeopardy. Is Watson able to determine the risk of answering incorrectly AND also setting a wager that aligns with that risk? (see endnote 4).

Since I always filter the world through the lens of sales enablement, I have to say that what IBM is doing with its Watson Project is very interesting. If IBM has indeed created a quick, accurate, and scalable "question-answerer" in the form of Watson, just think of the potential impact a "question-answering" machine can have on many areas of our businesses. More specifically, just think of the impact the technology can have on the sales channel. I mean, I have attended sales training classes where I was taught to be a "question-answerer." And I have talked with many senior-level executives in the last 12 months who stated that their salespeople need to have more product knowledge. And I have talked with marketing leaders who have said they've had challenges in "getting sales content into the hands of customers and salespeople." Well, if that's the case, then there's a real opportunity coming where portfolio, marketing, and sales leaders can simply load up thousands of pages (or maybe it's millions of pages?) of sales content into a "Sales Watson" and turn it loose on customers who need answers to their questions! If buyers need answers to their questions, "Sales Watson" can help with that!! Soon, there'll be an app for that, I'm sure. 🙂

Is The Sales Profession "Dead" — Again?

I remember 10 years ago when eCommerce was picking up steam. Some of the business leaders in my organization wondered what impact ecommerce would have on the sales channel. One person I talked with back then predicted that eCommerce would "make salespeople obsolete." It's often said that history repeats itself. So, if hypothetical "Sales Watsons" gain widespread adoption, will they sound the death knell for the sales profession? There, I asked it. I put it out there . . .

Before We Put Salespeople Out To Pasture, Let's Talk About Adding Value

Simply speaking, the hypothetical "Sales Watson" may add some value to customers through specific portion of the sales channel. Clearly, most buyers need answers to their questions so they can make a purchase decision. When it comes to understanding how buyers buy, sales leaders know there are different types of questions asked by different types of buyers, depending on the size of the problem they are trying to solve. To keep it simple, there are different "patterns" that exist within the sales channel, and those patterns are tied to the buyer's problem they are trying to solve. In other words, someone trying to upgrade software will have a different type of questioning process than someone looking to upgrade a data center. And these questions are driven by the problems buyers are trying to solve. While questions are indeed important, most buyers wouldn't have too many questions if they didn't have problems to solve (unless they were just naturally curious). And let's face it, some problems are pretty easy to solve, and others are exponentially more difficult. Just look at any sales organization and take stock of the type of questions the inside sales team asks has versus the type of questions the strategic account sales team asks.

In Sales And Marketing, It's Not About Question Answering, It's About Problem Solving

Clearly, having an enormous amount of knowledge about anything creates an advantage for answering questions (hint: this is why many companies focus their salespeople on product knowledge — often to the detriment of the problem solving process!) But IBM's Watson is a box — it's not human. As a result, IBM's Watson doesn't have influence. It simply isn't capable of navigating complex accounts and stringing together the agreement network of buyers who need to agree upon a problem and understand the role a vendor can play in solving that problem.

We'll have to see if IBM's Watson can leverage its knowledge to defeat previous Jeopardy! winners. The entire time, I'll be waiting for Watson to influence someone. 🙂  So, "are you a question answerer or a problem solver?"

1. Ken talks about being a "guinea pig" for IBM on his blog here.

4. You can watch Watson slay its "human competitors" in this video here.

B2B CMOs: Your Marketing Ops Leader Is A Four-Leaf Clover

Barbie Mattie 2 days ago
As prolonged economic unpredictability introduces the potential for short-termism, CMOs should look to their marketing ops leader for guidance.
Read More