Although an event that takes place in the offline world may be finite, it lives on in the online world. When a single incident becomes part of the Web, which is buzzing with real-time updates, critiques, and responses, the event takes shape, is assigned value, and is made into something significant. As a recent New York Times blogger put it, “the way we share, watch, read and otherwise consume content doesn’t happen on a linear timeline . . . the Web is always churning.” Sometimes, the aftermath of an event conveys more than the event itself.

Watching Apple announce the iPhone 5S and 5C last month was enlightening, but more revealing was tracking the fluctuating online consumer sentiment and response days later. Using Forrester’s NetBase social listening data, we measured the proliferating online discussion related to the Apple iPhone and recognized an immediate trend of negative commentary. Our data shows that while the amount of online conversation grew across a host of public websites, the positive sentiment regarding Apple iPhones plummeted, as the audience's brand perception became more negative. 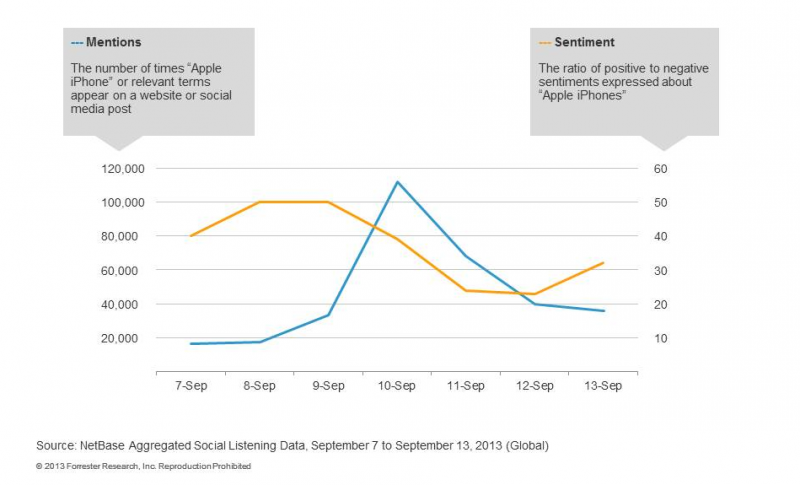 Taking the pulse of social sentiment is key to understanding consumers' behavior and mindset, but an immediate snapshot does not always show the complete picture. Despite the escalating amount of conversation and increasingly negative online consumer dialogue in the days immediately after Apple’s announcement, consumers eventually came around. Apple’s initial decrease in stock value turned around more than a week after the announcement, and Apple made additional headlines by surpassing Coca-Cola as the most valuable brand in the world by the end of the month.

Apple’s latest series of events demonstrates just how mutable consumer sentiment can be. In his recent report, my colleague Frank E. Gillett reveals that the 3Gs and 4s iterations of the iPhone initially “offered customers little motivation to upgrade beyond increasing performance, yet they sold in greater numbers than their antecedents.” Keeping tabs on the capricious consumer mindset and rationalizing the consumer motivations behind Apple's appeal is challenging; in order to truly understand — and ultimately predict — consumer retail behavior, marketers need to employ thorough, dynamic research that keeps pace with consumers' ever-evolving responses.

Discover 12 trends our research reveals will matter most next year. Download our Predictions 2022 Guide.

The Mystery Of AIOps Expeditions: What’s In A Name?

Carlos Casanova January 13, 2022
The 2019 publication, Take The Mystery Out Of AI For IT Operations (AIOps) was a widely read Forrester report. It addressed lots of the core questions our industry had about this new thing called AIOps. It also went on to provide an approach for achieving the 2019 goal of AIOps. Like all new concepts, we […]
Read More
Blog

Déjà Vu: Don’t Let AIOps Be CMDB All Over Again!

Carlos Casanova January 5, 2022
There's a big risk in setting unrealistic expectations for AI for IT operations. Learn how to avoid it.
Read More