As Apple announces it has sold more than 2 million iPads (no indication of US/global split), would-be competitors are unveiling their tablets at Computex in Taiwan. With so many products in the mix (and so few on the market), it can be hard for a product strategist to keep up with it all. So here’s Forrester’s quick guide to the tablets that are taking on Apple in the near future (note: this list doesn’t include devices that may have a tablet form factor but are primarily eBook readers, such as Acer’s planned 7” Android tablet. It also excludes tablets that are more rumor than reality. And I know just by putting together this list I will leave some off, and if that’s the case leave a comment and tell me which ones you think I should add. Okay, enough caveats!): 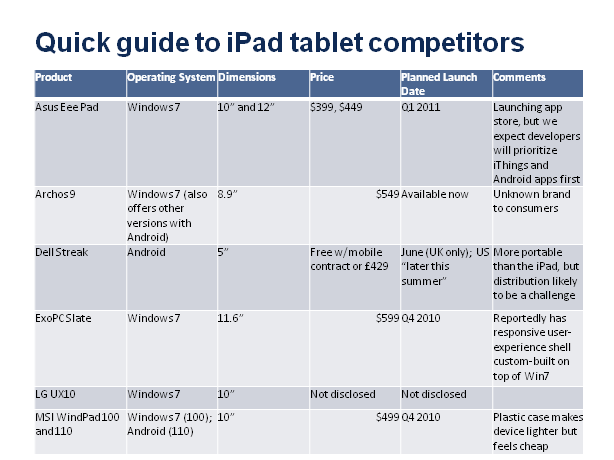 Noticeably absent from this list is HP, the No. 1 PC manufacturer, who debuted a Windows 7 tablet at CES and then mysteriously cancelled it. As we’ve written before in our blog and in a new report, Microsoft needs a Windows 7 tablet success to prove that its operating system can be relevant for new form factors. We forecast that by 2015, tablets will reach more than 50 million users in the US and will constitute 20% of PC sales, so the stakes are considerable.

Surveying the offerings from Computex, the good news is that Microsoft is working with multiple OEMs to get something out there; the bad news is that none of the products give consumers a real reason to choose them over the iPad. As Engadget notes, Windows 7 tablets like the Asus Eee Pad are like laptops without keyboards, and that’s not good enough. A hit Windows 7 tablet would do something above and beyond what the iPad can do: stream video, games, and Xbox Live connectivity back and forth from your tablet to your Xbox, for example, or integrate with other devices and software in innovative ways. It has to one-up Apple in solving a problem for consumers—to be the best computer for the living room, kitchen, bedroom, or bathroom, for example, or to be a better tablet for sharing with other people within a home or office environment. It could be more portable than the iPad, more comfortable to hold and use, or much, much cheaper. These are all opportunities for creating a better tablet than Apple has, but we don’t see the tablets—Windows 7 or Android—at Computex doing anything substantially better than the iPad.

Tablets are a supply-side driven trend—meaning that consumers don’t know that they want tablets until Apple and other companies teach them to want tablets. Apple’s iPad has the curation and the cache—not to mention the marketing prowess and the Apple Store distribution channel—to be the most successful at teaching consumers to want this “other” device in their lives. We don’t think it’s impossible for other products to unseat the iPad, but we haven’t seen them yet.

Stephanie Liu 3 days ago
In the era of data deprecation, many B2C marketing clients are asking me “How can I get more first-party data?” or “How do I get more customers to share data with me?” It’s a valid question and a totally understandable one. A common recommendation (including from Forrester) to contend with the loss of third-party cookies, […]
Read More