I attended the San Francisco Oracle Cloud Computing Forum on February 25, 2010 — one of 51 such events Oracle is running worldwide. Oracle described a strategy that is pragmatic for Oracle, but not well-articulated and missing key pieces.

Oracle described a two-step process to move from today’s typical architectures to internal clouds that makes sense (see figure) — and starts with adoption of Oracle's "grid" products. This progression makes sense, but not as easy as Oracle makes it sound. To be fair, most vendors understate the difficulty of transition from today's data centers to internal clouds. 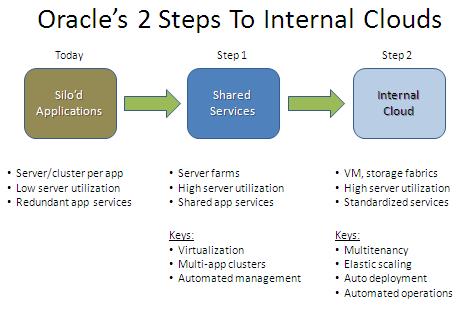 In my opinion, the most innovative aspect of Oracle’s strategy is the Oracle Private PaaS (platform as a service). This offering is Oracle’s database and the middleware components most commonly used for development wrapped in a design concept for cooperative development. Using Oracle Private PaaS, application development and delivery pros create shared application services, components, application patterns, a self-service portal, and automated deployment routines. Business analysts then assemble, deploy, and manage their own apps–primarily departmental and temporary apps. This is a great idea, but it looked to me like Oracle's offering required too much "IT assembly" to be practical for many organizations.

Oracle’s two steps to internal clouds are clear enough (if simplistic), as is its understanding of the pros and cons of today’s cloud computing offerings. But the next level of detail at the session was messy. The problem: Oracle was selling only gear and software kit for cloud computing – not solutions. Customers have to work too hard to get to a solution. And there are too many choices without enough context. Why should customers start with Oracle RAC instead of Oracle VM and WebLogic Virtual Server Edition? That’s just one question, there are many other choices built into Oracle’s strategy.

Oracle spent very little time on its hosted applications at the session. These products are obviously solutions rather than stuff to build solutions. But Oracle has not created SaaS offerings from its huge portfolio of enterprise applications. Oracle CRM On Demand is its only multitenant SaaS product.

Creating more SaaS products will help simplify Oracle's offerings for customers. But Oracle also needs to define packages of its hardware and software components — similar to IBM’s notion of a “cloud in a box” and/or Microsoft’s Business Productivity Online Suite (BPOS).

The biggest gap in my opinion is Oracle’s cloud-unfriendly licensing. Oracle still measures software in units of hardware – cpus or chip cores. This means that when you deploy Oracle software to one virtual machine on an 8-cpu server, you must pay for 8 licenses. Oracle’s Amazon EC2 prices equate 4 EC2 VMs to 1 cpu for the Oracle Database Standard Edition. This isn’t VM-based licensing; it is a formula. Without VM-based licensing, variable costs based on resource usage will be impossible. And usage-based costs are a crucial reason to consider cloud computing.

And where are the assessment and migration services from either Oracle or its partners? As discussed, the real issues in migrating from current data centers to internal clouds are organizational, cultural, political, and knowledge gaps. Customers will need guidance and help in making their transition.

Also, Oracle discussed a new Assembly Builder to simplify cluster and cloud deployment at yesterday’s event, but many cloud-management tools were labeled "coming soon." The concept demos shown at the event suggested to me that Oracle must do a lot more integration of its development and operational-management tools to provide its cooperative development vision. For ISVs, there's no billing services in the strategy.And Oracle doesn't support VMWare's popular vSphere virtualization software.

Lastly, Oracle's strategy doesn't address public clouds strongly enough. I believe that the transition to internal clouds will be so difficult that most organizations won't make it. Rather, they will look to providers of various descriptions to gain benefits from cloud computing. Oracle's strategy doesn't really address this scenario. It has partnerships with Amazon and Rackspace, but treats these partners only as channels, as discussed above.

Why? I believe that cloud is a revolution for Oracle, IBM, SAP, and the other big vendors with direct sales forces (despite what they say). Cloud computing has the potential to undermine the account-management practices and pricing models these big companies are founded on. I think it will take years for each of the big vendors to adapt to cloud computing. Oracle is just beginning this journey; I think other vendors are further down the track.

If you want to get the story from Oracle itself, register for one of the 51 events it is holding around the world. You won’t yet find materials describing the strategy on Oracle.com, although the Oracle Cloud Computing Center page has useful information.

Andrew Cornwall 3 days ago
I was able to attend the NVIDIA GPU Technology Conference (GTC) and focused on the extended reality (XR) track. If nothing else, it was clear that the attendees were enthusiastic about the use of Pixar’s Universal Scene Description (USD) format as an interchange format for the metaverse and XR in general. There’s A Huge Need […]
Read More
Blog