Over the past few months, we’ve fielded multiple requests related to the online shopping market in Asia. Retailers and vendors alike are looking to position themselves for long-term success given the rapid online growth rates in the region:  By 2013, for example, close to half of the global online population will live in Asia, with some 17% of the global total coming from China alone. To see how US online retailers are taking advantage of this shift, we took a look at the top 50 online retailers on the Internet Retailer Top 500 list and mapped their transactional sites in Asia. A few observations follow. 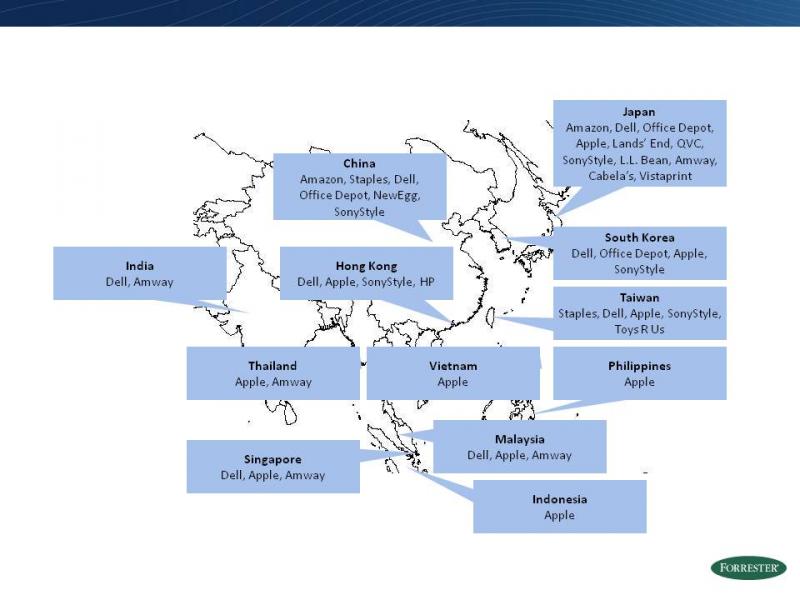 Japan tops the list, especially for companies with only one web site in Asia. What was interesting as we worked through the list was that relatively few of leading online retailers in the US operate transactional sites in Asia, and far fewer operate in multiple countries. Several top online apparel retailers, for example, operate a web site for Japan only: Lands’ End, L.L. Bean and Cabela’s have all taken this approach.

Consumer technology companies have the broadest regional reach. By contrast, online retailers in the consumer technology arena tend to have a broader regional presence. Dell, Apple and SonyStyle operate in multiple Asian markets, with Dell and Apple having the most transactional web sites in the region despite Sony's Asian roots. Office Depot also has a strong commitment to the region with eCommerce sites in Japan and China, as well as in South Korea.

Informational websites are still commonplace for multichannel retailers in markets like China.  The lack of transactional websites does not mean a lack of online presence in the region:  a large number of luxury retailers operate informational web sites for China, for example, which include store locators for their retail stores. As Asia becomes increasingly important to online retailers, look to see the number of transactional websites increasing – for now, however, companies looking to learn from the experience of large US-based online retailers operating in the region will have to work from a relatively short list.

A special thanks to our research associate Brendan McGowan for his help in identifying the regional transactional websites. Did we miss any sites on the Top 50 list? Let us know and we'll gladly add them in.

Lily Varon 9 hours ago
82% of software-decision makers at US retail companies are planning to adopt or are adopting payments software in 2022, per Forrester's data.
Read More