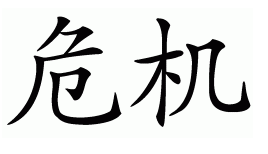 The word for “crisis” in Chinese apparently comes from two roots meaning “risk” and “opportunity” – there is both a downside, and the potential for an upside.  That’s how César Alierta, Telefónica Chairman and CEO, began the opening keynote of their 2010 Leadership Conference in Miami (where I spent several days last week).  For Telefónica, that definition has played out with the global economic crisis.  While results in Spain have been their downside, Latin America has been the opportunity.  Telefónica has a presence in 15 countries in Latin America (and 42 countries worldwide), with offerings in mobile and fixed telephony and in IT services.  Not all offerings are available in all markets but in many countries Telefónica has leveraged a strong position in one offering to expand into the others becoming the first integrated operator in the region.

According to José Maria Pallete, CEO of Telefónica Latinoamérica, Latin America represents 65-70% of their total customer base, 40% of revenues and about 40% of the operating income. In the enterprise space (as opposed to consumer services), 37% of Telefónica revenue comes from Latin America.  That corporate segment (including public sector) marked double digit growth in Latin America in 2009, with its biggest markets in Brazil and Mexico. 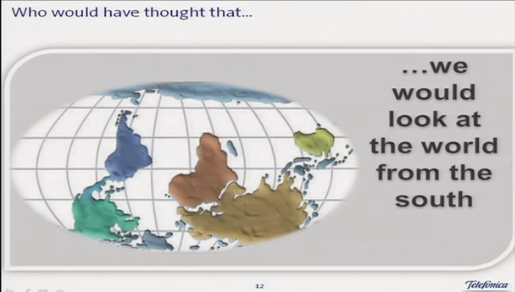 . Pallette noted, citing OECD statistics, public debt as a percentage of GDP is higher in advanced economies than in emerging and developing economies. That, he concludes, makes emerging markets a safer bet.  As he put it, it is now “safer to invest in Brazil than in Portugal” . . . or “in India than in Italy.”  Or as his slide (right) showed, we should perhaps be looking at the world – or more specifically the current opportunities – from the south.  All of the countries with projected growth of more than 3% in 2010 are in the south, and almost all of Latin America is there (again, according to OECD statistics).

And, that growth in Latin America compounds with the growth in demand for communications services with connected households/businesses, even more connected individuals and now increasingly more connected things.  I personally was interested in hearing about how Telefónica planned to exploit the “internet of things” – better to exploit things than people, I suspect.  But, seriously, in my research on “smart cities” I’ve been looking at the role of the telcom operators in providing these “smarter services.”  In my conversations with clients in the Middle East a few weeks ago, I discovered that not all telecom operators are as advanced in their thinking as others.  But, Telefónica does appear to be well on its way to developing solution offerings leveraging M2M technologies, and the smart computing paradigm.  Their strategy is clear: enter the M2M space from a point of strength – their network, and the communication services they offer.  Telefónica won’t go after all “smart services” – they’re not going to become an IT services shop – but instead has developed solutions in that focus on “adjacencies of IT with communications.”  I’ll just note a few examples:

Consistent with their strategy, these services both rely heavily on the network and communication services.

I’d love to hear from others about how telecom operators are offering “smart” services, and working with governments and other agencies to make cities smarter.

Bobby Cameron 20 hours ago
We are happy to announce the publication of a collection of data snapshots on senior technology decision-makers’ attitudes and behaviors around being future fit. Forrester defines future fit tech strategy as “an approach to technology that enables an organization to quickly reconfigure business structures and capabilities to meet customers’ future needs and expectations.” In fact, […]
Read More
Blog

Biswajeet Mahapatra 6 days ago
Forrester is a trusted go-to partner for many CIOs across the globe. CIOs have been working with Forrester on various initiatives to build a customer-obsessed organization of the future. I am excited and thrilled to be joining Forrester as a CIO analyst to carry forward this great legacy. Never before have CIOs dealt with both […]
Read More