When the Apple iPhone App Store launched a couple of years ago, we saw a flurry of marketing applications released. Some were exceptional. Many were average. iPhone apps were "hot," and consumer brands rushed to build them. They were somewhat expensive with most of the return based on press mentions and buzz. Brands felt that the perception of tech-savviness generated by the presence of an iPhone application would enhance their brand. I think they were right, but soon consumers began to expect iPhone applications. Initally, the iPhone didn't offer much reach. The iPod touch helped build the numbers. Apple's most recent announcement put total sales at over 80 million. Pretty good.

Two years ago, consumers mostly used their cell phones for communication. They also listened to some music and got a bit of weather, traffic and news. Now … they do just about anything. They shop. They research products. They blog. They look up recipes. Are they doing so in large numbers? No, not yet. Consumers are a lot more likely to do more complex tasks on smartphones like the iPhone. The stakes are much higher for marketers – the potential return is higher with the ability to generate real leads and sales.

Here we are in 2010. Apple recently announced sales of 1 million iPads. Forrester believes that number will at least triple by year end. Apple has launched the iAd platform and promised consumers an engaging media experience that will include advertising, but not be disrupted by it. iAd includes the iPhone platform. iPads add another dimension or canvas that will unleash advertiser/agency creativity. We are now seeing our first marketing (first perhaps) and commerce (secondary?) applications. They are engaging. They offer rich media. They are interactive. They offer opportunities to link to videos, music, social networking sites, and shopping.

I had my first look at the relatively new GAP iPad application today. Here's a screen shot: 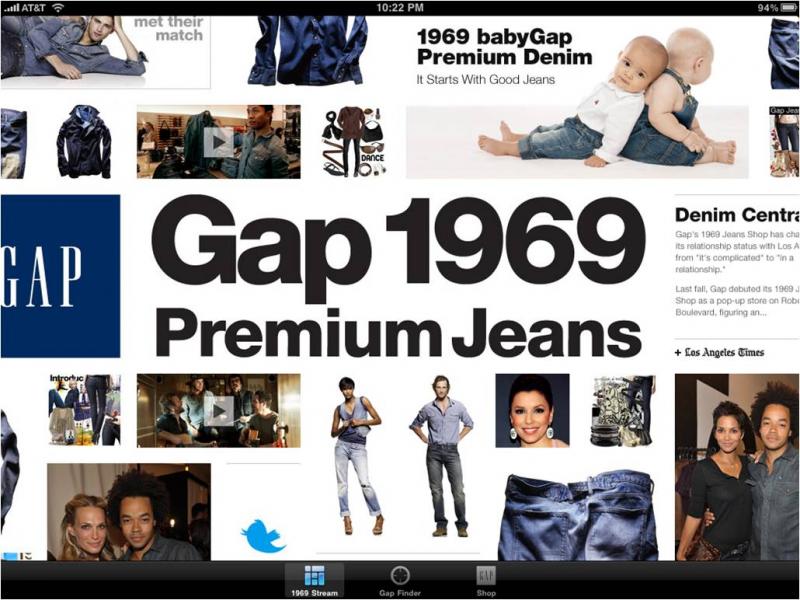 What I struggled with initially:

– The application was larger than 20 MB so I had to connect to a Wi-Fi network. Not a huge obstacle, but extra steps.

– I didn't "get" all of the functionality initially – wasn't sure what was interactive and what did what. (We now have ads that need user experience or UI expertise. Interesting concept.)

– I didn't immediately understand that there were no borders – that the content was circulated as if a sphere. (Someone had to explain it to me.)

– Discovery – searching on "GAP" worked, but I struggled with the category search.

What I found really compelling:

– Once I spent some time with the application, I began to understand how engaging the content is. I had to explore a bit – there were videos, there was some music, there were articles, etc. Totally fun.

– They offered key features consumers seek in mobile retail applications – location of nearest stores (but not all stores it seems for some reason) and shopping – could buy the jeans being promoted within the application. I believe consumers will make purchases on this platform – easy to use, easy to enter information, high-quality photos/graphics – the display size is similar to laptops.

– Like with the iPhone, near-term benefits may be primarily buzz. I believe that applications like this will get a lot of attention in the near term. There is a tremendous amount of creativity. It is a new platform – lots of room here to break new ground. I think consumers will make purchases – the display is large enough to faciliate complex tasks, whether product research or shopping.

– Reach is limited in the near term – 1 million devices sold, but more to come. The 1 million people reached are an appealing audience. They also tend to be the type that influence others.

– There will be a learning curve for consumers — (or maybe I'm just old); I had to explore and play around with this application a bit before I understood all that it offered.

– Will these be one-off seasonal or event-based applications or will the content be refreshed within this application? How will the next campaign be launched? New app? App update? Will I save preferences on sizes?

– What kind of context will the iPad offer? For example, cell phones are personal devices we carry 24×7. Will the iPad be a personal or shared device? Will we carry it mostly around the home or will we take it shopping, traveling, to the coffee shop? How relevant will our location be to iPad advertisers?

Along these lines, here's one from Pottery Barn that I downloaded, but I need some help. I couldn't figure out how to browse the catalog without registering with this third party. Despite their offer of security, I wasn't convinced of the benefits. 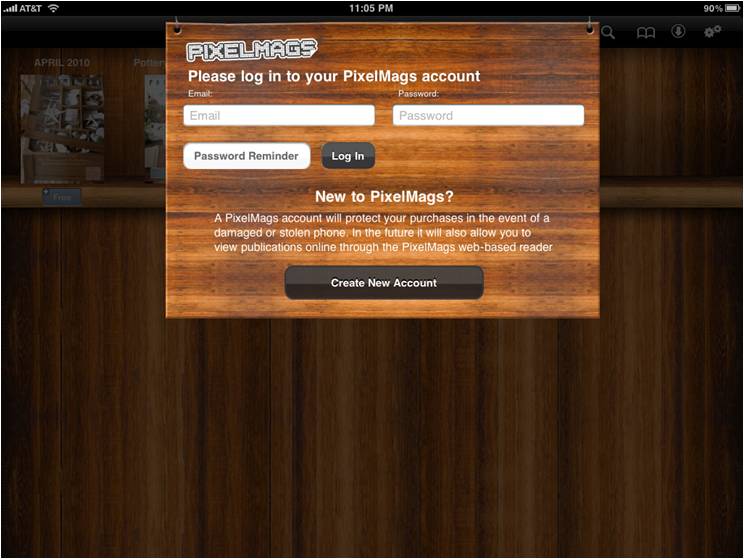