About four or five months ago, I was on a United flight bound to the east coast from San Francisco. For reasons I don't remember, I had booked the ticket on Orbitz (I usually book directly so my records, receipts, etc. are all in my profile). Am boarded. Am sitting in a middle seat. Sigh. "Ping" goes my phone. I receive an alert that our flight has been delayed 20 minutes. I open my bag and pull out a salad. The two gentlemen in between whom I am squeezed look at me oddly and exchange glances as they expect the doors to close and the plane to back away from the gate. Salad finished. "Ping" goes my phone again. There is a maintenance issue with the plane. The "equipment" is being changed and we are being moved one gate over. I begin packing up my things, remove my seat belt and give the guy on the aisle my look that says, "are you moving or what?" He says to me, "where are you going?" I say, "equipment + gate change." He says, "how do you know?" I say, "SMS alert from Orbitz." He says, "What is an Orbitz?" More puzzled looks are exhanged. (Do I really want to explain a text alert in the year 2010 to someone who doesn't know what Orbitz is?) Several minutes later there is an announcement from the flight attendant with the same information, and everyone gets up to move. Now my fellow passengers are more intrigued. A third party is more efficiently delivering information to United's passengers than United is to their agents or customers directly.

I don't know how many times I've seen this poster in a United Airlines jetway and wondered, "Is this recent? or 20 years old? Do a lot of doctors fly? Is that why they advertise pagers?" 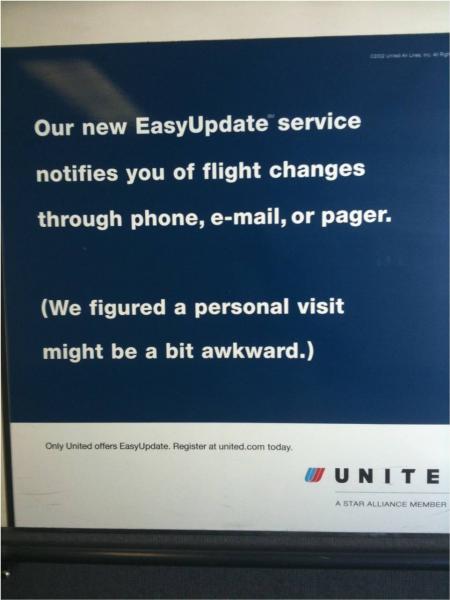 Then came mobile boarding passes. They were Web-based. I first tried to use one when I was traveling (no printer) and running late (checked-in in cab) en route to the airport. One of the key values of mobile is "immediacy." I got into the frequent flier security line at ORD. Got to the front of the line (and remember I was running late) … and the TSA official looks at me and says "And? You're in the wrong line if you want to use your cell phone as a boarding pass." "What!?!?!?!?," I think. "Who would you expect to be using a boarding pass on his or her cell phone? The occasional traveler over in the long line or the frequent traveler?" Heavy sigh. They had mobile set up for the non-FF line. Really? By the next time I flew through Chicago, this had been remedied. Generally speaking, we find that the most loyal, frequent users of a service will trust a brand and have more reasons to download a dedicated application or use mobile services. Mobile isn't typically used to serve the occasional guest or customer. It is more often than not intended to offer convenience to consumers – and increasingly so for acquisition.

A few weeks later, I saw United advertising its mobile services on its in-flight TV programming. I thought, "yay – go United." Seriously – I like to see companies do mobile well. Use your ATMs, kiosks, Web site, TV, radio, bill inserts, etc.  – use it all to promote your mobile services.

Then recently … an option online … print or email with a link to the boarding pass. Yay, again. 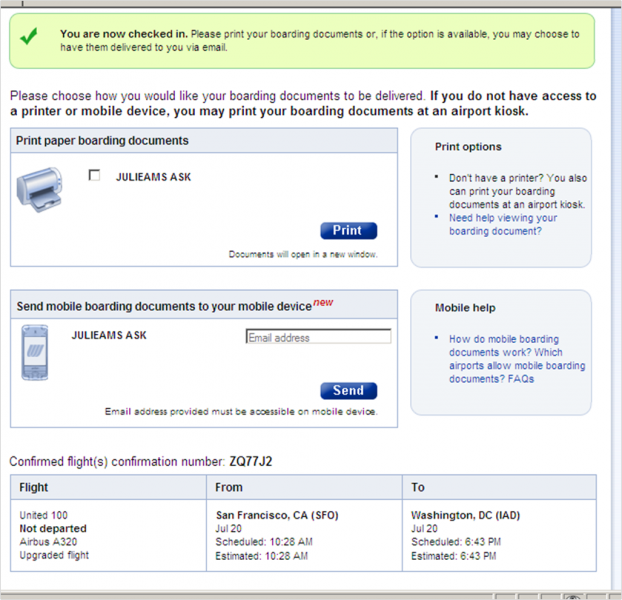 Today at the aiport … ok, they were using iPhones to promote a chance to win more legroom … ok, there is an immediate benefit … value in immediacy of checking out this promotion now. 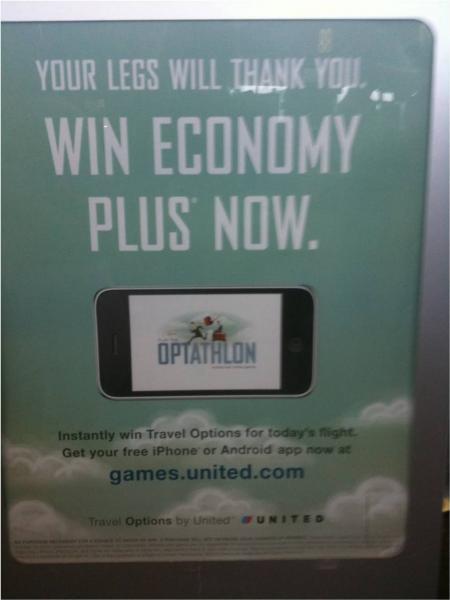 I'm struggling with what it all means – take a closer look at the "call to action."

I do a search on "United" in the iPhone app store. Nothing. Ok, not a best practice. I type "games.united.com" into the browser on my phone. There is an automatic redirect in the application to:

"Use fancy footwork to kick falling items onto your tray table in Legroom Legend. Hop on your roller suitcase and hit the launch ramp at full speed to soar over the lines at the airport in Line Jump Hero. Play the games before your flight, for a chance to instantly win Travel Options for your trip. Play anytime for a chance to win one million Mileage Plus miles!"

Now, I'm lost. If anyone has flown United recently, you know the flights are almost always full and the best seats go to those who spend the most and fly the most. I'm keeping an open mind though and go looking for the game.

So, it gets better. I try to connect to download the application – it's over 20MB so requires a connection over a Wi-Fi network or a sync from my computer. So …. not ideal if you want to play immediately and win the extra legroom. I continue on. I download.

Turns out, the game is HIGHLY entertaining – I love it! A red-headed kid is throwing stuff at me – need to kick the object. Not hard. Reminds me of early-day pinball machine games on my Atari. These aren't all the steps below, but they show some of the United branding and graphics. They also collect an email address to redeem. What I love more though is the INSTANT WIN  option – especially for the Red Carpet Lounge. A day pass isn't that cheap and it typically would come with wine, Internet access, snacks, newspapers, electrical outlets, comfortable seats, and quiet. I suspect you only can win each benefit once to experience it so you're willing to pay for it the next time, but I'm hopeful that a round of "Legroom Legend" will get me a free pass into the Red Carpet Lounge each time I fly. 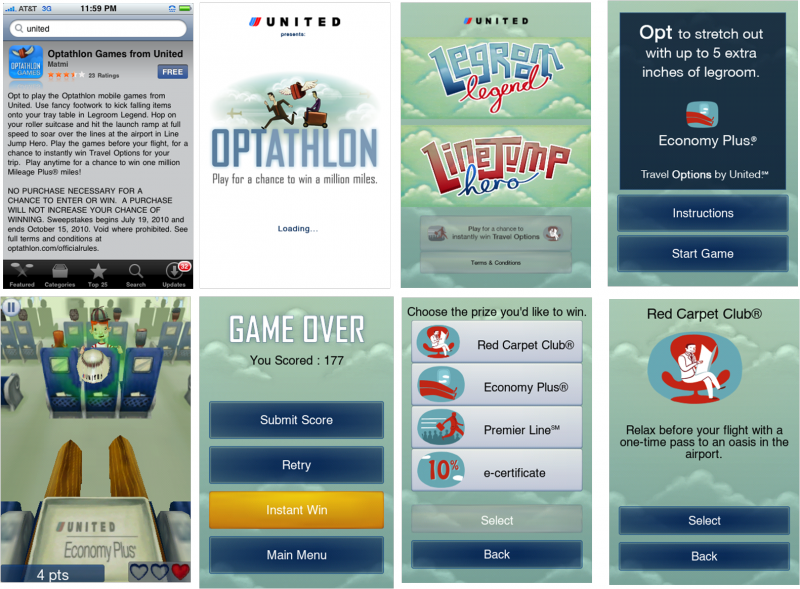 Am both puzzled and intrigued by United's prioritization – a game over an application for the frequent flier. Would love to speak to someone (maybe at United?) who can speak more to this. I know it is going through a major integration with Continental and there are probably good reasons why it doesn't have a mobile application yet with the basics. Using a game to introduce customers to the benefits of United is an idea that can have a positive impact – would love to see the numbers. There are a few bumps in the execution – e.g. 20MB download at the gate, can't find via a search on "United."

Meng Liu 3 hours ago
Accounts receivable (AR), including invoice issuing and payment processing, is one of the core processes in a company’s financial operations. The rising adoption of e-invoices has spurred more firms to acquire AR automation software to support customer demand and respond to digital transformation. My recently published report, The AR Invoice Automation Landscape, Q1 2023, will […]
Read More
Blog