The new book Empowered highlights the benefits of empowering HEROes (highly empowered and resourceful operatives) within the workforce. As we approach our first-ever CIO Forum in October, I’m looking around for great examples of how governments are using social technologies to empower employees to serve empowered citizens.

When I think of government IT projects, I often think of multimillion-dollar projects lasting years before going live. But it doesn’t always have to be that way, as the following example illustrates.

Peter Koht is a HERO working for the City of Santa Cruz Redevelopment Office. In 2009, the city was facing its worst budget crisis (a problem familiar to many city officials). Running out of options, the city had already shut down civic services such as the community pool, museums, and a family resource center when it faced up to the reality that the people of the city needed to be involved in the decisions about what services to cut. Unfortunately, the voices too often heard at civic meetings were representatives of the extreme viewpoints at either end of the political spectrum. In an effort to collect more ideas from the silent majority, Peter suggested the city could tap into social media to connect with its citizens. Lacking any kind of budget or resources, Peter had to rely on the help of three volunteers to get a community site up and running in a week. 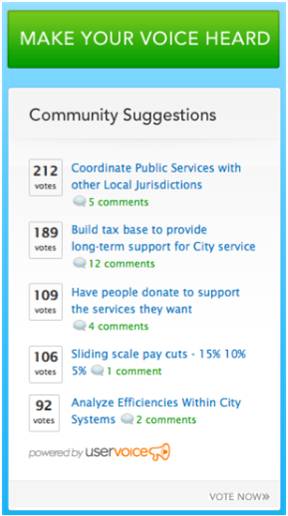 With the help of 2009 startup UserVoice, Peter and his volunteers were able to bring a community site online quickly and economically. Through the site, citizens could offer suggestions and vote on each other’s ideas. A simple series of blog posts from the mayor helped reach out and inform people of the opportunity to help. In addition, the city opened up its finances to the public on the website, allowing anyone, including some of the many CFOs living in the city, to dive in and offer suggestions based on real numbers.

As ideas came in, people would vote on them. The extreme ideas would fall to the bottom of the list and the most popular, and most reasonable, ideas floated to the top, along with detailed comment threads from citizens discussing the ideas and how they could be implemented. Although the site was only live for a few short weeks during the budget planning period, it was a resounding success, achieving participation by roughly 8% of the community with more than 200 suggestions received and thousands of votes (with significantly more participation than was typical through public meetings).

Almost all nations, including those without open democracies, have a government that claims to represent the people. The plethora of social technologies emerging onto the market offer an unprecedented opportunity for governments around the world to be truly transparent and answerable to the people they claim to represent. As the city of Santa Cruz example shows, the democratization of government by the use of social technologies allows more people to participate in the tough choices facing the people we elect. I suspect the United States may well be leading the world in the opening up of government — but I would expect nothing less of a government “of the people, by the people, for the people.”

The Santa Cruz example illustrates how social technologies can improve government even on a shoestring budget. But I can’t help feeling that such isolated cases are at the leading edge, with the vast majority of government departments at local and national levels still lagging behind in their adoption of social technologies for public use. So prove me wrong — if you know of a great example of your local government office adopting social media, I would like to hear from you to help build awareness of what’s possible (please leave a comment on my blog, email me, or connect through Twitter or Facebook).