Before Java was invented, one of the key industry trends was to increase the productivity of both developers and end users. For example, fourth-generation programming languages (4GL) such as Powerbuilder, Progress, and Uniface provided professional developers with faster ways to develop business applications than using COBOL, Pascal, C, or C++. For end users, tools such as Dbase, Lotus Notes, and Visicalc provided them with the unprecedented ability to create mini-apps without the need for professional developers. In the early ’90s, this productivity trend was thrown into a tizzy by the Internet. Now, software vendors and enterprise application developers had to rush to write a whole new generation of applications for the Web or risk becoming irrelevant. The Internet forced developer productivity and 4GL’s to take the back seat.

Java was designed in 1990 as an easier and more portable option than C++ to develop embedded systems.  The invention of the WWW in 1993 started a meteoric change in IT application development. Sun Microsystems moved quickly to take advantage by selling “network” servers like hotcakes and offering Java as the platform for Web development. Most other software vendors were caught off guard and Java became the de facto Internet development standard for enterprise Web application development.

Forrester data reveals that Java is still firmly planted in enterprise IT shops for custom-developed applications (see figure). But, data always tells us what happened in the past and does not predict the future. Application developers should also not make the mistake that adoption means goodness. 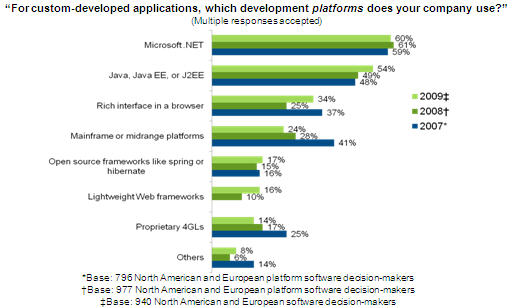 Java is not going away for business applications, just as COBOL is not going away. Java is still a great choice for app dev teams that have developed the architecture and expertise to develop and maintain business applications. It is also an excellent choice (along with C#) for software vendors to develop tools, utilities, and platforms such as BPM, CEP, IaaS, and elastic caching platforms (ECP). Software such as operating systems, databases, and console games  are still mostly developed in C++.

Java Has Served Its Purpose, But Now It Is Time To Move Forward

What It Means: Application Development Teams Must Find A Better Way To Develop Apps

Many enterprise application development teams are already using a combination of tools and technologies to overcome the complexity and inflexibility of Java applications. BPM is used to quickly define and change business processes, and collaboration suites like SharePoint and Lotus are used to respond to the increasing demands of long-tail apps. Progress Software’s responsive process management (RPM) combines the best of BPM and business events to help businesses respond to real-time events and change business processes. This is just a small sampling of the next generation of business application development tools

Clear standard alternatives to Java and C# for custom-developed applications do not exist. There are issues with many of the alternatives. For example, BPM tools are great for defining and implementing processes but a poor choice for implementing compelling user experiences. The market for application dev tools is beginning to change though. The next generation of app dev tools will:

You Must Transform To A Lean, Mean Change Machine

Application development teams should create a three-year application development strategy and road map to include architecture, process, talent, tools, and technology. All options and trends should be put on the table and up for discussion. Development platforms are not the only items to consider. Cloud computing and mobile, to name a few, are other trends that must factor into your new strategy.

Bill Martorelli 24 hours ago
Technology outsourcing is not dead, but it's changing. A lot. Learn which five areas you should review for your outsourcing strategy.
Read More
Blog