Forrester’s Forrsights Software Survey, Q4 2010 has quantified for the first time how enterprise demand is shifting from traditional licensing models to subscriptions and other licensing models, such as financing and license leasing. However, the shift to subscriptions for business-applications-as-a-service is the major driver of this change. Traditional enterprise licenses are slowly decreasing, and Forrester predicts that subscriptions for SaaS applications will drive alternative license spending up to 29% — as early as 2011. This demand-side change goes beyond front-office applications like CRM. In 2011 and 2012, enterprises will opt for “as-a-service” subscriptions for more back-office applications, such as ERP, instead of licensed and on-premise installations. Detailed data cuts by company size and region are available to clients from our Forrsights service. 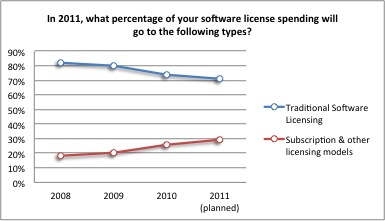 What does this means for existing independent software vendors (ISVs) and infrastructure vendors?

Fujitsu is already addressing the hardware market shift (3). They already invested in the capabilities of its hardware to serve the demand from service providers. For example, it added multitenancy to many management tools on top of the hardware to enable a service provider business model. This is a step that Oracle, for example, has yet to take for its Exalogic offering. Another example is Fujitsu’s commitment to virtual private cloud concepts with partners like Microsoft. Fujitsu, Dell, and HP are the only hardware vendors that will soon offer an Azure appliance. The sheer size of the minimum 1,000 physical CPUs turns this hardware/software combination into an interesting offering for shared infrastructures at providers rather than something that many enterprises will initially put in their basements. Obviously, Fujitsu will run Azure appliances out of its Fujitsu Services branch. But the important part of Fujitsu’s strategy is actually its commitment to also offering the Azure appliance to any service provider. This not only broadens the market share, but it will also keep Fujitsu’s own Azure service very competitive from the beginning.

Fujitsu’s middleware products have achieved major license revenues mainly in Japan, while they play a niche role in North America and EMEA. Consequently, Fujitsu decided NOT to fight for license revenues in the new middleware paradigm (2) against the competition of traditionally licensed on-premise middleware software outside of Japan. Fujitsu has skipped this step and is addressing directly the growing demand of ISVs migrating to the SaaS adoption shift (1). Forrester believes that the platform requirements for SaaS applications will generate a significant market for platform-as-a-service (PaaS) solutions. (Forrester clients can read our report on PaaS market sizing here.) More than 1,000 ISV solutions already exist for example on salesforce.com’s AppExchange, of which 269 (currently) have been natively developed for this platform. However, not all ISVs find that force.com — or any of the other PaaS offerings — offer the right combination of a multipurpose PaaS and a readiness to serve and integrate into large enterprises. This is exactly where Fujitsu is heading. After its first infrastructure-as-a-service (Iaas) offering last year, Fujitsu’s software branch today kicked off a series of PaaS capabilities that will make it easy for ISVs to migrate existing applications to cloud delivery and develop new SaaS applications from scratch. (link)

Fujitsu is adding with today's announcement canned platform capabilities — such as billing services, user registration, the creation of different pricing models, and other horizontal PaaS capabilities — to its infrastructure offering. This allows software vendors to really focus on the business application. Unlike many PaaS offerings, Fujitsu also enables ISVs to migrate existing Java-based applications to a managed SaaS application. More typical PaaS capabilities, like a marketplace, are on the near-term road map. Forrester expects that Fujitsu will also add a business-process-driven programming paradigm to the Java-based platform it currently supports.

Fujitsu offers an interesting alternative for ISVs that sits right in the middle between the force.com offering in the public cloud and the traditional ISV enablement programs from IBM. The creation of a new ecosystem and the number of solutions available in the marketplace will be key success indicators for Fujitsu’s coming year.

Let us know if you tried this new service and leave a comment.