At first blush, the decision by Warner Bros to rent movies on Facebook seems a little out of place. Sure, people watch a lot of video (mostly YouTube) on Facebook, but they don't go there to watch two hour movies, right? Well, for now they don't, but with some tweaks, they could start doing so very soon.

As my colleague Nick Thomas said yesterday in his blog post about Facebook's potential as a premium content platform, the future of traditional and social media are likely to be intertwined. Most of us, myself included, have been imagining them blending in the living room, where viewers can access Facebook on any number of devices while watching a movie on the TV. But would people be interested in exactly the reverse? When I checked in on Facebook I found the first evidence that the answer is yes. 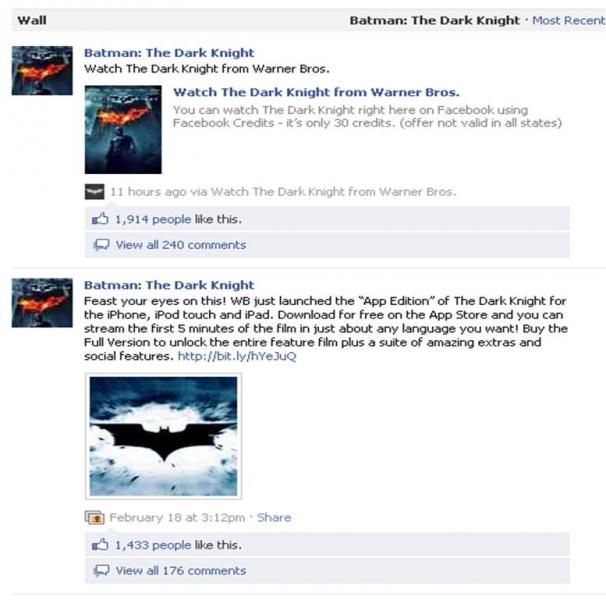 You see here that within 11 hours of being posted, 1,914 people liked the idea of watching The Dark Knight on Facebook. This is compared to the 1,433 people who have liked the App Edition of Dark Knight that was announced nearly a month ago. (Don't try this at home; for some reason, the post announcing Facebook viewing has since been removed and I can't check for more recent numbers.)

Why is this? Because if you're one of the almost 4 million people who took the time to indicate you are a Dark Knight devotee on Facebook, it is very likely you already think of Facebook as an awesome place for movies and movie-related activities — why not go all the way and watch a movie there? And imagine if this eventually extends to all the devices that have Facebook apps on them. Then imagine that Warner Bros. and Facebook make it so you can not only watch the movie in Facebook, but clip, share, and comment on specific scenes or moments. That would immediately give it viral power.

The next big question I had was who holds the customer data, currently a contentious issue in the world of Apple. When I signed up to watch Dark Knight on Facebook (sorry IT department, it was for professional reasons only), this is the screen I got, answering my question quite handily. 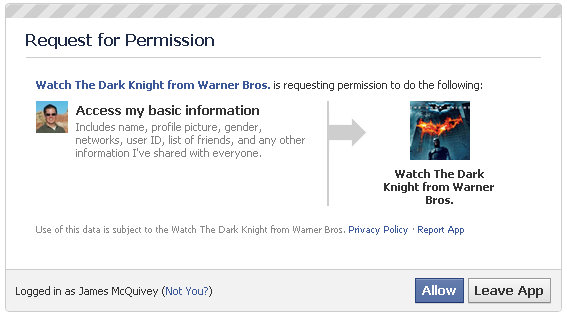 Not only does Warner Bros. get data about me, they get data about my friends (sorry, friends, it was for professional reasons only). This is an infinitely more useful data profile than Warner Bros. will ever get from Apple, Redbox, VUDU, or even Comcast. Talk about your fabled win-win: Facebook gets a new revenue stream and an even stickier experience; Warner gets a new revenue stream and an actual customer relationship.

For this to grow it must extend beyond movies and for that to happen, Facebook has to step forward with a more complete monetization model because as I showed in a recent report, most video content is not paid for directly, but via subscription. If Facebook offered all three video monetization models to its users — subscription, premium paid, and ad-supported — it would be the first online video solution that could compete directly with cable.

Karen Tran September 26, 2022
Companies' pledges to become more sustainable are encouraging — if they translate into action. Marketing leaders must work to ensure that messaging aligns with action and purpose.
Read More