A lot has been written about potential threats to Intel’s low-power server hegemony, including discussions of threats from not only its perennial minority rival AMD but also from emerging non-x86 technologies such as ARM servers. While these are real threats, with potential for disrupting Intel’s position in the low power and small form factor server segment if left unanswered, Intel’s management has not been asleep at the wheel. As part of the rollout of the new Sandy Bridge architecture, Intel recently disclosed their platform strategy for what they are defining as “Micro Servers,” small single-socket servers with shared power and cooling to improve density beyond the generally accepted dividing line of one server per RU that separates “standard density” from “high density.” While I think that Intel’s definition is a bit myopic, mostly serving to attach a label to a well established category, it is a useful tool for segmenting low-end servers and talking about the relevant workloads.

Intel’s strategy revolves around introducing successive generations of its Sandy Bridge and future architectures embodied as Low Power (LP) and Ultra Low Power (ULP) products with promises of up to 2.2X performance per watt and 30% less actual power compared to previous generation equivalent x86 servers, as outlined in the following chart from Intel: 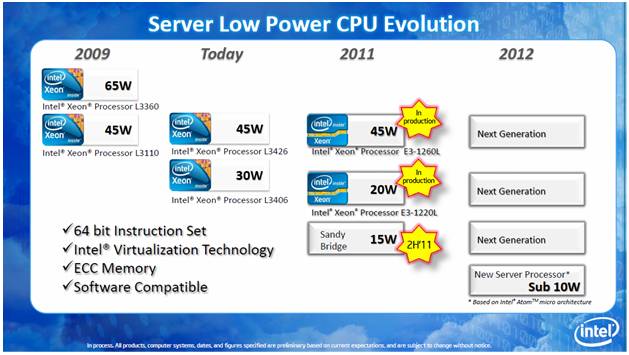 So what does this mean for Infrastructure & Operations professionals interested in serving the target loads for micro servers, such as:

While it is still tempting to make comparisons to emerging technology such as ARM, which may still deliver better performance per watt when the first server products appear late this year or next year, Intel’s products will offer some advantages that cannot be denied by even the most enthusiastic booster of alternative technologies, including:

The only negatives are the fact that these processors, while improving performance and performance per watt, are still not going to get below 5 watts per core until 2012 for an Atom-based derivative, by which time they will be competing against both the best and newest AMD Interlagos derivatives as well as the first generation of ARM upstarts, and the Xeon CPU’s power draw, which seems to be stubbornly stuck in the range of 8 -10W per core, will need to come down further in order to come across as true leaders in power and performance.

However, in all honesty these drawbacks are admittedly a bit of apples to oranges, since they are comparing currently available (such as the E3 1220L) and near-term evolutionary products with products that are not yet shipping. For I&O professionals desiring a range of low-power servers, these new Intel offerings will keep them on a totally compatible software path while reducing power consumption and improving performance per watt. These newest Intel ULP products are available today in servers from multiple system vendors in densities of up to 84 servers per standard 42U rack and higher (Sea Micro, based on an Atom variant, offers substantially higher density as noted in an earlier blog post).

All in all, for deployments at least through 2011 and into 2012, these look like another set of winners from Intel.

Biswajeet Mahapatra 6 days ago
Indian enterprises have had software as a service (SaaS) on their radar for the last seven-plus years, if not more. SaaS uptake in India was slow, and cost used to be the only major driver toward SaaS adoption. Indian enterprises were in dilemma when major software vendors shelved their on-premises solutions in favor of SaaS-only […]
Read More
Blog