That's right, I said eReaders. True, it looks like a tablet, runs like a tablet, and delivers a lot of the value that tablets deliver, but the Nook Color's 1.2 upgrade (which is actually a step up to Android 2.2; don't let the numbers confuse you too much) is really a foreshadowing of the future of eReaders, not the future of tablets.

First, the facts. With the new upgrade that will be gradually pushed out to all existing Nook Color devices for free over the next few weeks (or you can download now at www.nookcolor.com/update), the folks at B&N have added some very useful features: an integrated email client, Flash 10.1 support, a curated Android app store (see sidebar), and an improved user experience through a myriad of tweaks. These upgrades make the Nook Color look more and more like a tablet, with a very attractive $249 price point to boot. 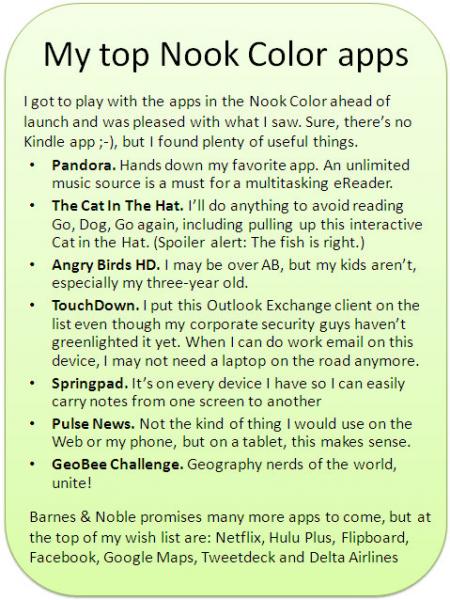 Must the iPad now cower in fear? No, not really. Because even at this price point, the Nook Color remains a smaller, less powerful tablet than the iPad. And as we've seen, the range of competitors coming in after the iPad's territory are coming in at higher prices with more powerful features (for example, last week I dropped $529 for an LG G-Slate from T-Mobile with 3D video camera and 4G data plan). The tablet market is gradually moving into higher-power features, not lower-power experiences.

That's why I say that the Nook Color is really about setting a new bar for eReaders. Because at $249, the Nook Color makes those of us obsessed with books think twice before buying a Kindle. Though I love my Kindle 3.0 for its long battery life and great reading experience under any light, my fingertips are nearly bruised from all the times I absentmindedly press them against the screen in vain. And oh that I had the proverbial quarter for every time I have wanted to jump out to email, or fire up Pandora while on my Kindle.

No, Barnes & Noble is not targeting Apple with this device. Instead, it's targeting Amazon, trying to undermine today's black-and-white Kindle as well as tomorrow's color Kindle tablet (something I've insisted Amazon should be working on for over a year now; see my original post from Apri 5, 2010). Think about it: the person likely to buy a low-price tablet that is optimized for reading is the ideal Amazon customer. Barnes & Noble may have come to market with its original eInk Nook second, but its Nook Color upgrade gives it the upper hand in the war over the serious reader.

The serious reader wants to read bestsellers, classics, genre fiction, whatever has caught their fancy as of late. But these people also read magazines and children's books, two things the Nook Color does as well as the iPad and certainly much better than the Kindle. Amazon knows this, and all signs point to the fact that Amazon will someday release a color tablet, else why build its own Android app store? Amazon is not locked out of this opportunity due to B&N's early advantage, however. Amazon will work hard to show that its digital media offerings — including cloud-based music and digital video streaming — make its tablet uniquely powerful. In fact, Amazon's tablet will compete with the iPad; though if Amazon's smart, it will use the new sponsorship model it is currently testing for the Kindle with Special Offers as a way to offer a larger, more powerful tablet than the Nook Color but at a price below $400. If you're an Amazon Prime customer, for example, you might pay $349 for the tablet as long as you're willing to receive promotions and offers through the device.

What of eInk eReaders? They don't go to the trashpile yet. In fact, they become extremely important as a way to have access to the family's digital bookshelf across multiple devices. We have this in my home — two of our teenagers read my Kindle books on their own devices, and it was late last year that my wife suddenly started referring to our Kindle 3.0 as "my" Kindle. I expect that I will be able to pick up a Kindle with Special Offers in Q4 2011 for $79 to make up for the fact that I can't seem to keep one in my possession for very long.

In fact, this points to a hole in Barnes & Noble's Nook strategy. The Nook Wifi currently sells for $149. To round out the bottom of its offering, B&N should put out a basic Nook without the color touch panel for $79, thus encouraging a family to own a range of Nook devices that satisfy a variety of needs.

Device prices and configurations aside, the content relationship is the endgame for all of these companies. Whichever company can meet more of your content needs, on a more regular basis, will end up selling you multiple devices and locking you into a digital relationship, exactly the way Netflix has done on its path to world video domination.

Thomas Husson 4 days ago
There is no single green or sustainable consumer. Learn the value of segmenting your customer base by their green purchasing habits.
Read More