Skip to content
< Blogs
Home > Featured Blogs > The Data Digest: Urban China’s Mobile Internet Use Is Double That Of The US

While it is no news that China leads the world’s online population, hitting 477 million users as of March 2011, it is interesting to look at the uptake of mobile Internet in urban China and see how that compares with other regions. Forrester’s Technographics® data shows that urban China is chasing Japan closely, with 43% of mobile phone users reporting they access the mobile Internet at least monthly. This number doubles that of the US (although the US number represents all Americans, rural and urban), which ranked as the third market in this study. While my gut feeling tells me that urban China’s mobile Internet adoption is comparable to that of the developed markets, this result is still striking because the smartphone market in China did not kick off officially until the end of 2009. 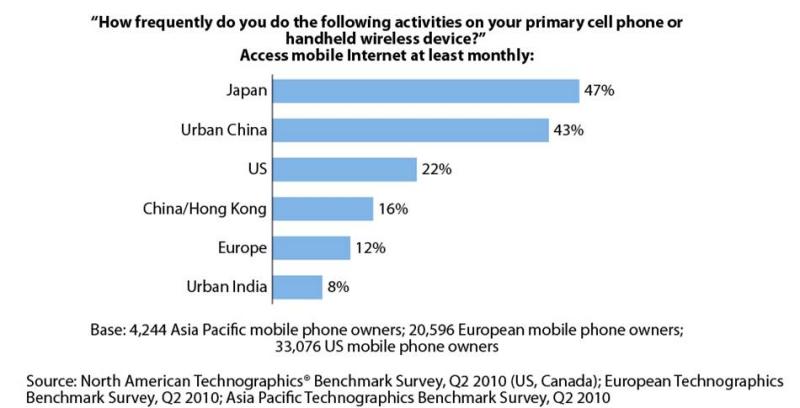 Just last month, China Mobile, the dominant mobile service provider with 60% national market share, announced its plan to lower rates for both calls and data plans by an average of at least 15%. And on Monday, China Daily reported that the number of China’s microbloggers was forecast to reach 100 million this year and will increase to 253 million by 2013.*

The booming popularity of microblogging in China, coupled with the fact that mobile Internet is becoming more affordable, means that urban Chinese will not forgo the convenience that mobile Internet provides. We know another wave of growth is approaching. It is just the matter of how high the wave can reach.

* Weibo means microblog in Chinese, and it the Chinese version of Twitter which is owned by Sina.

Biswajeet Mahapatra 3 days ago
Indian enterprises have had software as a service (SaaS) on their radar for the last seven-plus years, if not more. SaaS uptake in India was slow, and cost used to be the only major driver toward SaaS adoption. Indian enterprises were in dilemma when major software vendors shelved their on-premises solutions in favor of SaaS-only […]
Read More
Blog

Tina Moffett 5 days ago
Marketing analytics is the practice of measuring, managing, and analyzing data from marketing initiatives — including channels, programs, campaigns, and tactics — to improve marketing effectiveness and identify opportunities to optimize short- and long-term objectives. You probably already have basic marketing measurement approaches running — whether it’s last-touch or a 30/60/90-day analysis of your email […]
Read More