On the night of his 18th birthday, Gregg Allman drew a bull's-eye on his shoe, then shot himself in the foot to avoid the draft. If next week, Forrester's IT department declared that I should be expecting a box with a thin client PC at my desk, and I would be expected to use it instead of my MacBook Air for work, I'd be drawing a bull's-eye but not on my shoe. It would be on the box.

I suspect most road warriors and office workers alike would feel the same way. Ever try to go to a meeting in a conference room with a thin client? It's bolted to your desk. As long as all of the information you ever need for meetings is crammed between your eustachian tubes, you're good to go. If however you're like the rest of us, there are benefits to taking your computer (and applications and data) with you, like showing more than one other person what you've been working on.

That's where client virtualization (as opposed to simply VDI) comes in, and it's in this context that Dell's acquisition of Wyse makes some sense. Wyse makes thin and zero clients, as most of us hopefully know, and surely not by pure coincidence…so does HP. But thin clients as a standalone tool for most of us, is a non-starter. But as part of a mosaic of virtualization technologies that taken together offer me my work environment no matter where I am, have potential.

The problem is…such a nirvana isn't real yet for most of us. It's expensive, and it requires ubiquitous network connectivity from Boston to Bangalore, and every airplane seat in between, to be viable as a primary productivity tool for people who travel at least occasionally for work. Hotel lobby wifi ain't good enough for VDI, folks. And there are a lot of us who travel. On top of that, there is a huge contingent of angry workers going off the chain with IT controls. They're bringing Macs to work and Windows 8 Ultrabooks are on deck, not to mention iPads and just about anything else that does't have anti-virus and "management" crapware slowing it down.

Our data shows that thin client sales have not followed the same growth path as hosted virtual desktops (See Figure 1). I interpret this to mean that other endpoint types are being used instead, such as ThinPCs and good, old-fashioned desktops and laptops running Windows or Linux too. What happened to the explosion in thin clients we were supposed to see?

That's why Wyse stands an excellent chance inside of Dell, and why the acquisition makes good business sense. Thin Clients require a broad spectrum of technologies to deliver value to more workers than they can today. It also doesn't hurt that Dell knows a thing or two about selling hardware. Wyse will be accretive to revenue, but other technology barriers will need to come down before thin clients can play home venues while the band goes on tour. 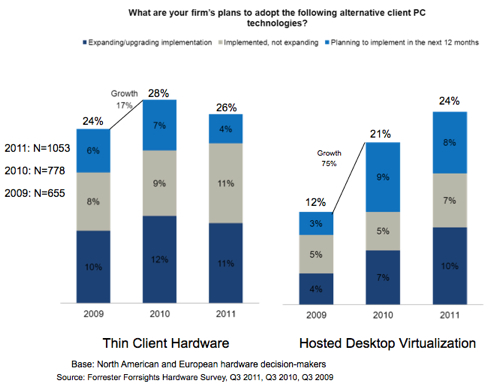