At the end of 2010, we published a blog post about the results of our annual US “Understanding The Need Of The Changing Consumer” report, in which we reported that for the first time ever the average time US consumer reports spending online is the same as what they report spending watching offline TV. As the data is self-reported it's different from the metrics collected by Nielsen or comScore, but it tells a very important story that is coming directly from the mouths of consumers: In their minds, time spent with offline and online media is split equally.

However, this discussion came at a time when the iPad had only been launched for about six months and worldwide there were less than 15 million iPads sold. At the end of 2011, we conducted a quantitative Technographics® study and ran a qualitative project in our Community Speaks community to better understand: the relationship among tablets, laptops, and TV; how consumers are currently using the Internet and TV; and how they’d like to do so in the future. Forrester's Technographics data shows that many consumers who own a laptop or tablet use that to go online while watching television: 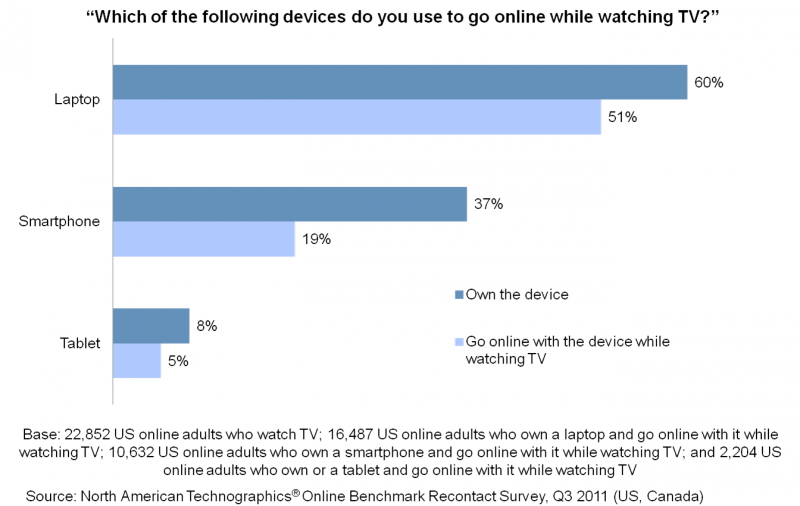 Our Digital Consumer Community gives more insight into what consumers do while watching TV: They are online doing activities that include browsing, playing games, Facebooking, looking up information related to the shows they're watching, and working. As Jacob (35, Helena, Mont.) said, "I tend to watch a lot of news programs, and I enjoy reading news on my computer or iPod touch while I listen to the news on the TV at the same time."

Forrester analyst James McQuivey's take is that viewers are increasingly using the Internet to fill in the cracks between their TV moments, bringing more devices to the TV experience to add to or even distract them from what's on the TV screen. This will only get more complicated for device makers, advertisers, and service providers, because as we learn from our data, there is no single direction they all want to evolve in. Prepare to learn from your unique audience what they value most in the emerging TV experience, and develop your strategy from there.